The Krewe of Zulu Puts the Sublime in the Coconut

What comes to mind when you hear the word coconut? Is it peaceful tropical beaches, coconut-scented tanning oil, and palm trees blowing in the wind? Or, is it the chaos—the noise, the color, the excitement—of thousands of festive parade-goers, all of them elbowing, shoving, and screaming, while vying for the coveted trophy of decorated coconuts distributed by festively costumed krewe members atop 30-ton floats?

In New Orleans this time of year, if you’re thinking coconuts, you’re most certainly thinking about the Zulu parade on Mardi Gras Day. There’s no doubt that Mardi Gras just wouldn’t be Mardi Gras without the Krewe of Zulu, and where there’s Zulu, there are coconuts.

Naaman Stewart—a Zulu member for 27 years and their president since 2012—sets the record straight about the history of his krewe, what all is involved in getting that coconut from the tree to your bag of loot Mardi Gras Day, and Zulu’s life beyond coconuts. 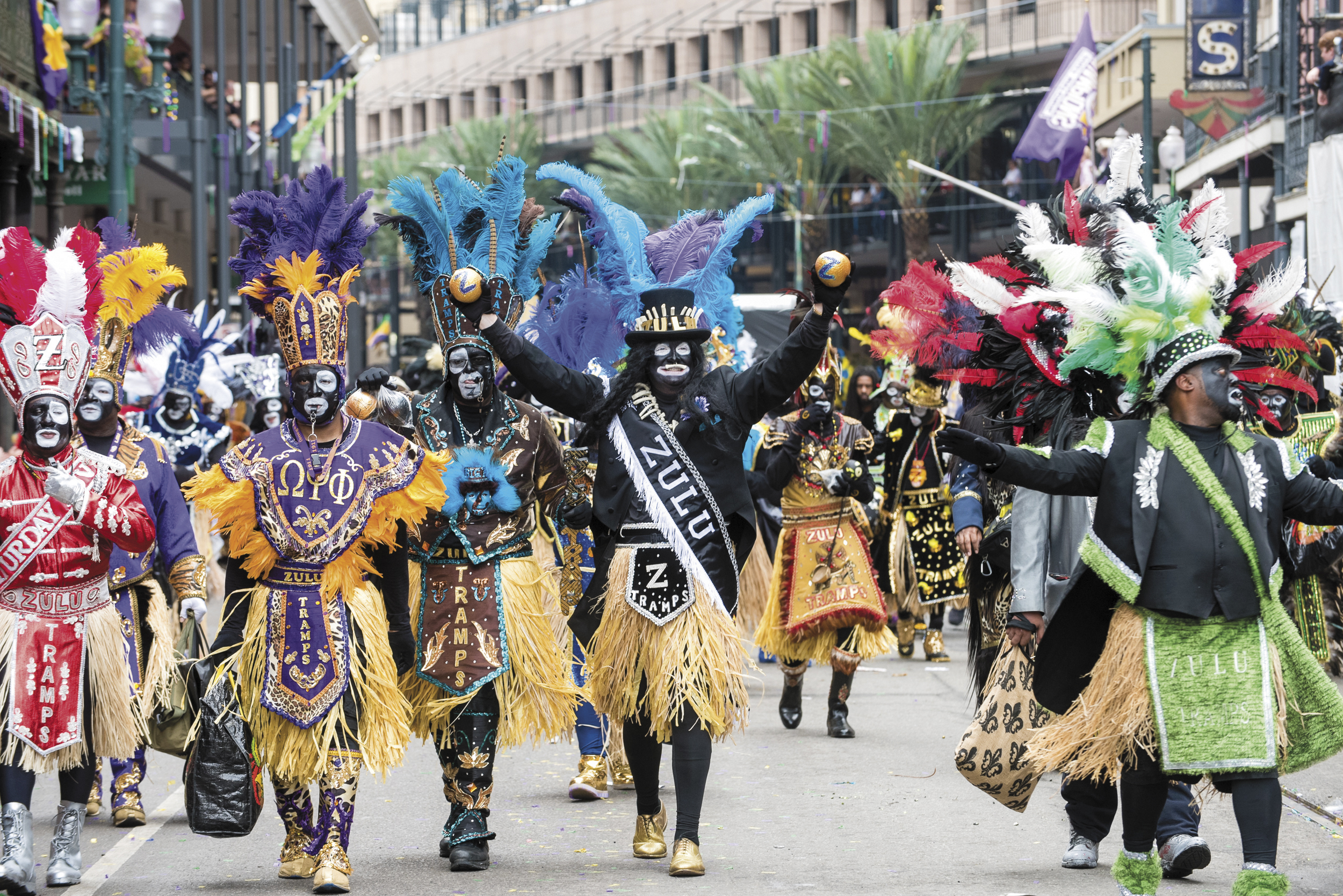 So Much More Than Coconuts

An 800-man organization with members all across the country, Zulu formed in 1909 and was officially incorporated in 1916. More than just a basic Mardi Gras krewe, they function all year long, putting on a variety of events and activities, such as a picnic, a Mother’s Day festival, a coronation ball (which approximately several thousand attend), and, of course, the parade. Zulu is also heavily involved in the community, from mentoring children and offering scholarships, to sponsoring food and toy drives at the holidays. “Since I’ve been in this leadership role, it’s been something that has been important to me to make sure that we are out front as far as community service is concerned,” Stewart says. Zulu also has its own buildings, a “club house” of sorts, where members can come together, socialize, organize, plan events, and maybe grab a drink at the in-house bar.

Let’s Hear it for the Boys

Stewart explains that according to their constitution, Zulu is the “every-man” club. Though the krewe is 98 to 99 percent African American, as long as you’re a morally upstanding man over 21 and you’re registered to vote, you’re eligible to become a member. “We’ve never discriminated, and that’s something that we’re proud of,” Stewart explains. “We have black men; we have white men; we have rich men; we have poor men; we have straight men; we have gay men. Every configuration of maleness is what is a part of the Zulu Social Aid and Pleasure Club. And once you’re in, we call everybody ‘brother.’”

Yes, it’s true that membership is only for the boys. But ladies, never fear. Women are not left out of Zulu entirely. Though women can’t become official members, they are still able to join one of the 27 sub-groups of Zulu, referred to as “krewes,” which give them many of the same privileges the guys have, including taking part in the Mardi Gras parade. And, of course, a woman will be crowned as queen. 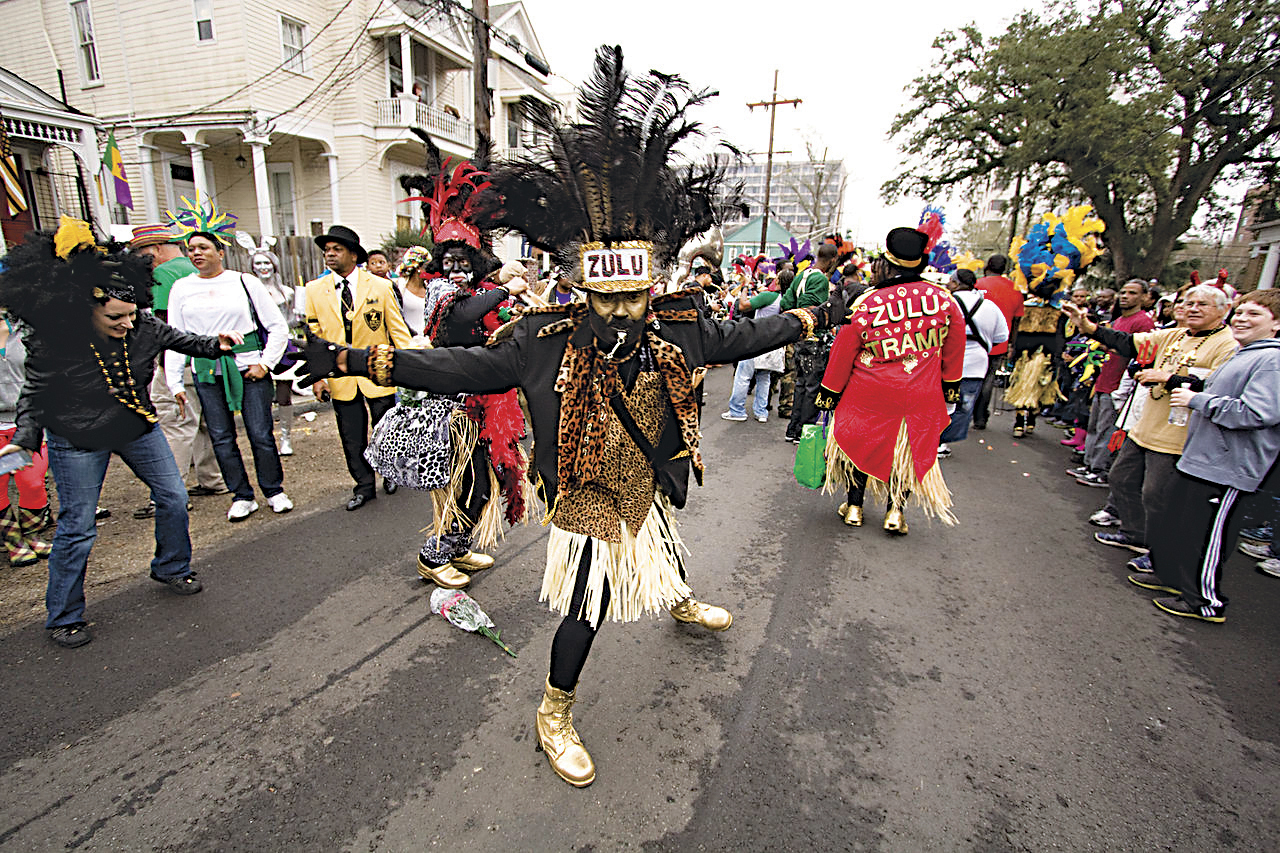 Don’t Believe Everything You Hear

So, how did Zulu come into being over a century ago? You’ve most likely heard that the krewe first began parading in order to parody—or, some might say, to spite—the predominantly white Krewe of Rex, with whom they still share parading rights on Mardi Gras Day. But according to Stewart, that’s all a bunch of hooey. The real story goes that a group of guys, known as the Tramps, were already parading on Mardi Gras. The Tramps happened to see a play about the Zulus of South Africa, and were inspired enough by what they saw to instantly change their name and their identity to Zulu. The Krewe of Zulu was born.

They then named a king (who wore a crown made from an old can of lard and carried a banana-leaf scepter) and continued parading in a similar vicinity as did the Krewe of Rex. Any other similarities between the two groups were purely coincidental.

Another common misconception is that the “blackface” that the krewe continues to wear on Mardi Gras today is any connection to Al Jolson or Vaudeville. Also, not true. The truth is, it was against the law to parade back in the day without some sort of mask. In search of something with which to cover their faces, the Zulus discovered that burnt ash was readily accessible, cheap, and would do the trick for masking purposes. “As most African Americans at that time, we had to work with the resources that we had at our disposal in our community,” Stewart explains. “And we took them, how meager they were, and made them work for our organization.”

Another thing that was readily available to Zulu members in those days was produce. A lot of these guys worked in the French Market, which, back then, was much more green market than flea market. This meant that produce was easy to come by. Zulu’s first king carried a banana stalk, their first float was a produce wagon, and their first throws were also produce-based: in the beginning, they threw walnuts; then by the 1930s and 40s, this evolved into coconuts. Stewart says that besides the accessibility of coconuts, they also fit the Zulu theme. “You pair it with the warrior, the Africa, the jungle theme,” he adds. “What do you see in the jungle? You see coconuts.” 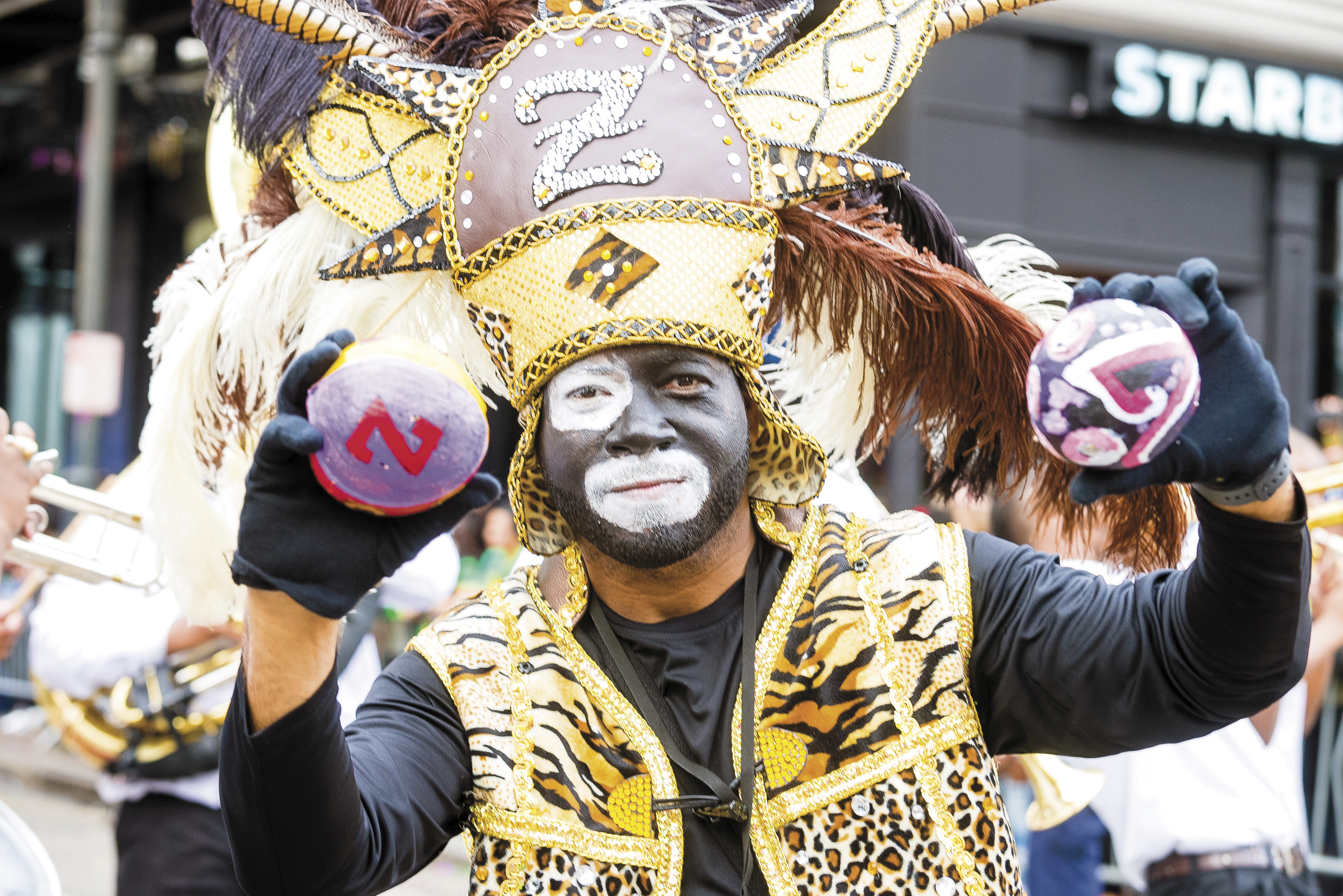 The coconuts of today—that we all knock people down, hang off the sides of floats, or beg and plead to acquire—are a far cry from the coconuts of yore. “When we gave them away at first, they were in their raw state—just hairy coconuts,” Stewart says. But, he goes on, “Over the course of the years, the Zulu parade participants started to get creative. So, you had the coconut shaved, then painted, then decorated. And so, it evolved into the beautiful finished product that you see right now.” And beautiful they are indeed. You can get coconuts decked out with glitter, feathers, beads, sequins, googly eyes … even a coconut formed into an elaborate candleholder or a turtle with a moving head. “We’ve seen Saints helmet coconuts; there was a guy that had a remote-control car coconut,” Stewart adds. “You name it, we’ve seen it: Superman coconuts with the cape, Mr. Potato Head coconuts with the sunglasses…”

But coconuts haven’t only gotten prettier and fancier, they’ve also gotten lighter. In the wake of several lawsuits from parade-goers being accidentally injured from falling coconuts, Zulu had to seek out less cumbersome throws. Stewart explains that a raw coconut full of milk can weigh between one and three pounds, a weight that is multiplied exponentially if it’s hurled from a float at a parade-goer caught off-guard. “You have a coconut in your hand from an elevated position, so you have to think about the trajectory. And you have to think about the force,” he says. “I don’t want to say it’s like a bowling ball, but I’ve seen some of the damage that is caused to people who were unsuspecting.” 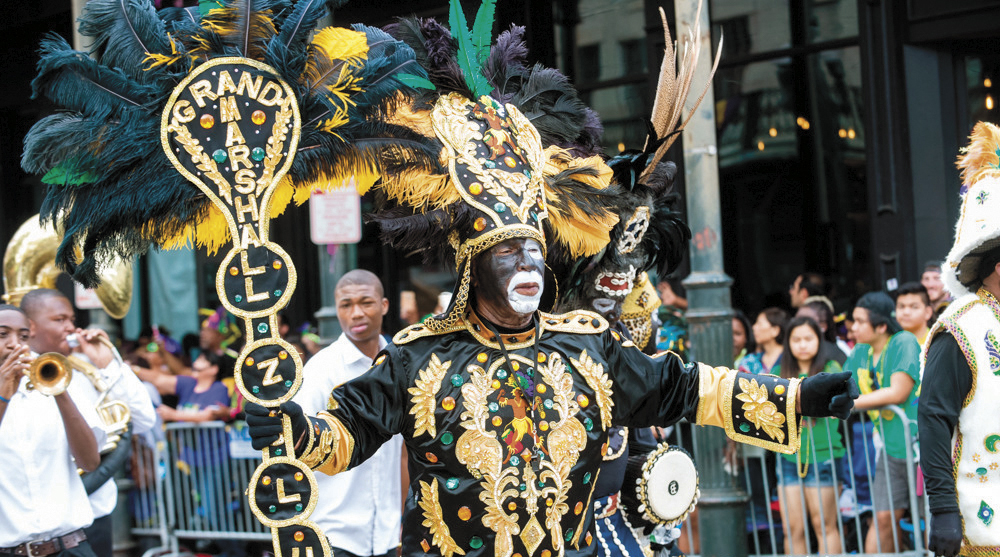 A Shell of Their Former Selves

To avoid such unintentional mishaps, Zulu no longer allows milk-filled coconuts to be distributed in their parade and opts instead to use merely the outer shell of the coconut. Therefore, the weight of an average Zulu coconut today has now dropped below a pound. Though, if you’ve ever had one hit you in the head, you know it still smarts even then.

Getting rid of the milk wasn’t only a weight issue, however; it also increases their longevity. Stewart explains that coconuts in their raw state are prone to rotting, sprouting, or cracking in the cold. “After Mardi Gras, it would start to mildew. Another vine would start to grow out of it,” he says. “However, with this lightweight coconut, this is something that lasts for eternity, because all of the elements that would create the environment to disintegrate are not there.”

So, these days, Zulu gets their coconuts shipped from Vietnam—drained of milk, scraped of coconut meat, cleaned, sanitized, with a first coat of paint applied—and almost ready to go. All that’s left is the decorating—which, mind you, is no easy task. 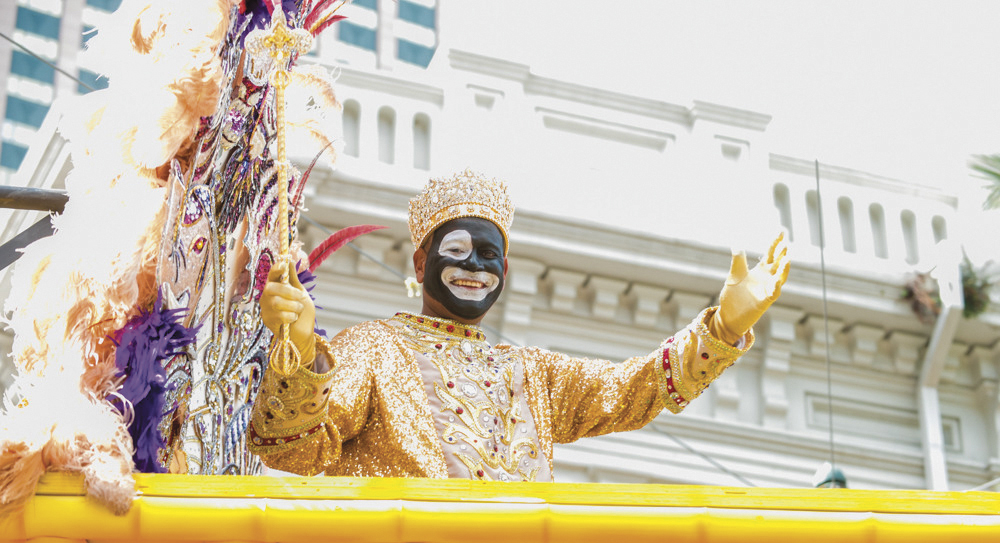 Coconuts by the Numbers

According to Stewart, Zulu’s 1,300 parade participants are all responsible for between 100 and 200 coconuts each. This means that, altogether, Zulu distributes between 150,000 and 200,000 coconuts every Mardi Gras—all of which have to be decorated. While some folks hire coconut decorators to do the work for them—which can very quickly add up to 30 or 40 hours of labor, depending on how elaborate you want your coconuts to be—plenty of others have coconut-decorating parties or coconut-related family gatherings. When Stewart was younger, decorating revolved around the holidays. As soon as the remains of the turkey and stuffing were cleared off the table, it was time for the family to pull out the coconuts and start decorating. He says they usually had all their coconuts finished up by Christmas. “It was glitter all over the house,” he remembers. 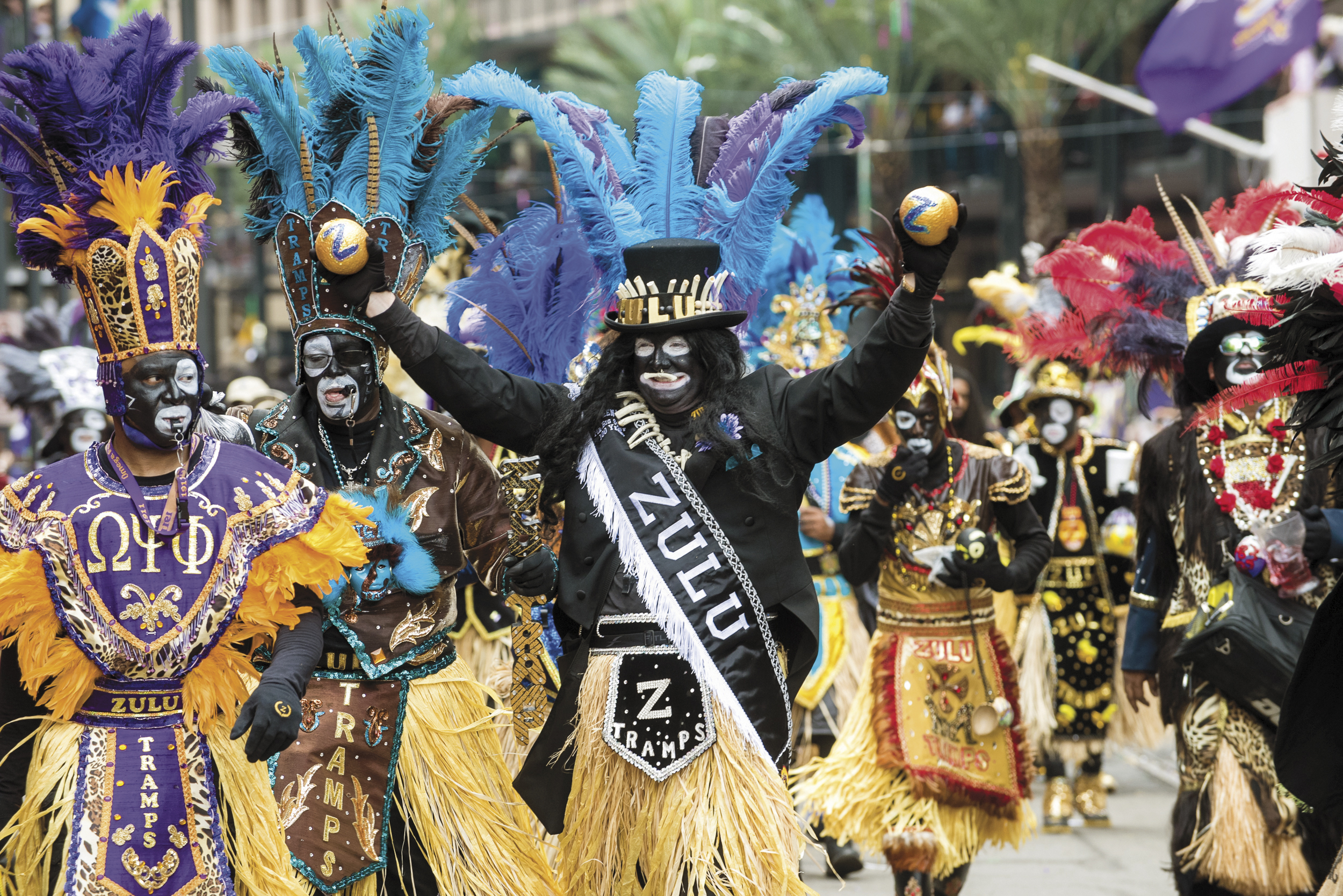 People desperately love these coconuts and are willing to do just about anything to get them. This includes begging, holding up signs, shouting “I’m from out of town!” or “It’s my birthday!” (with driver’s license in hand to prove it), and outright bribery. “Bribery definitely happens,” Stewart confesses. From food, to cans of beer, to bottles of liquor presented for trade, “it just depends on what you want versus what you want to give up and what you have to offer,” he says. Seeing as the Zulu Mardi Gras Day begins at 3 a.m. and doesn’t end until the following afternoon, it’s understandable that weary and hungry float-riders would be susceptible to bribes of refreshments.

But while you might be ready to offer up your first-born child to obtain a coconut, hold off on that. Because, in fact, that baby just might be your golden ticket to getting the coconut you so desire. Stewart admits that krewe members are more inclined to give coconuts to certain people over others. “Baby’s number one,” he says. “Senior citizen’s number two. A cute individual. Friends, always. And I used to love to give coconuts to the lady police officers.” If none of those apply to you, keep a bottle of Crown on hand, just in case.

“When you come to the Zulu parade on Mardi Gras Day, you’re looking for a coconut,” Stewart says. “If you’re lucky enough to get one, you can understand how special they are and how valuable, and what they mean to us.”

As someone who has run alongside a float for three blocks, held up signs, offered bribes, and snatched a coconut from a stranger (I gave it back), I couldn’t agree more.

For professional woodworker Greg Arceneaux, money really does grow on trees. Don't you dare call Greg Arceneaux a tree-hugger. That term has negative connotations. Besides, Arceneaux doesn't drive a Prius, and he doesn't compost. No, he's more of a tree...

Love New Orleans? Lived here all your life? How much do you really know our beloved town? Now, you can show off your infinite New Orleans wisdom and mad trivia skills with a new NOLA-themed game show. Once a month, on the second Saturday of the month, "Do you kNO-LA?," hosted by Courtney Mpagi, will quiz contestants through four rounds of questions for a chance to win prizes. "While anyone can be a contestant,...

Who is That Masked Man?: The Demographics of Mask Usage Among Americans

Gallup News has released the results of a study of Americans' mask usage, which has been being conducted since early spring. It is no surprise that only 44 percent of Americans "always" wear a mask, and 14 percent "never" wear a mask while outside their homes. "While majorities of women (54 percent), Democrats (61 percent), Northeasterners (54 percent), and those with annual household incomes under $36,000 (51...