New Orleans artist Kenneth Barnett has just launched an apparel project inspired by the nationwide protests of the Black Lives Matter movement and the call to action for political participation in this year's critical elections. Ten percent of the proceeds from the project will be donated to the voter rights organization Fair Fight, founded by Stacey Abrams. Barnett's first t-shirt design features a graphic reading "VOTE" with the letter V powerfully substituted by an image of the "hands up, don't shoot" gesture, directly connecting the movement against police brutality to the call for individual political action.

"That image speaks for itself, for the most part," Barnett said of his design. "I just feel that so many African American men have been mistreated unfairly throughout the years, through centuries, so 'hands up, don't shoot' speaks to fairness. I am here to protest. I am not armed, and my hands are up. I want fairness. I want equality."

Over the past month, organizers and activists have channeled their anger over the police killings of George Floyd, Breonna Taylor, Modesto Reyes, and other black people into a nationwide movement. New Orleans organizers started the month of June with 7 Days of Action, including peaceful protest gatherings in Jackson Square and marches around the city demanding justice. For many people, taking action involves this kind of gathering in protests across the nation or working to take concrete actions in the Black Lives Matter movement, to fight against police brutality, white supremacy, and racial injustice.

For Barnett, it felt natural to turn his anger and pain over the discrimination and injustice he has witnessed into art. With his background in the art world and fashion industry, having worked as a freelance graphic artist and a visual artist under the May Company and with the Belk, Inc. team, Barnett transformed his emotions into this concrete and expressive project. As he saw his 24-year-old daughter Camille join in the local activism against police brutality and racism, Barnett says he especially felt the need to create a design like this.

"After witnessing and watching our youth protesting and really fighting for their voices to be heard, it just hit me like a ton of bricks, to be completely honest—the idea and the concept," Barnett said of his design process. "I got it down real fast and shared it with my daughter and my wife, and they were amazed. The image itself represents youth, and it represents struggle. It represents years and years and years of not being heard."

Barnett says that the zeal of the movement brought out many emotions for him, especially based on his family's foundational values and his own lived experiences as an African American man.

"My mother is extremely strong-minded, so she expressed and taught us at a very young age the importance of speaking up and using your voice to protest for fairness and equality," he said. "The movement that I see today is a beautiful movement. There are many emotions packed. There's anger, there's pride, and there's a motivational feeling within me to make my voice heard."

While many artists during this time are taking their talents to the streets with protest signs or are circulating them via social media graphics, Barnett felt that the wearable medium of apparel was important, in order to foster pride and connection within and outside of the movement.

"The choice of making it a piece of clothing is because it's more than a slogan for me," he said. "It's art, and it's a creative piece, using the image as a V to spell out the word 'vote.' I believe that the shirt can be worn to send a message to say, 'I'm proud of this message,' and to say, 'I encourage you to listen to this message.' I think there are many parts to my design, and I'm just hoping that it sticks and that the right person will see it and tell the next person, 'We gotta vote.'"

The message encouraging people to take their emotions and motivation to the polls is an important one for Barnett, especially at this time. Many of the young people who have taken to the streets to protest feel disillusioned with the political process after years of voting for politicians who do not end up making the changes promised or needed. Still, voter suppression is rampant, even now with the COVID-19 pandemic bringing challenges of long lines or early-closing poll sites to those seeking to exercise their right to vote. According to Fair Fight, this voter suppression particularly affects voters of color and young voters. In this critical election year, Barnett hopes that people will not only take to the streets, but will also take to the polls to have their voices heard.

"The message of 'Vote' means to me equality and fairness. It means someone in the office, whether it be in the presidential office or mayor's office or governorship, will follow and will cooperate with the votes that got them there," Barnett said. "We have sometimes politicians that say one thing and do another. It's my hope that with this upcoming election, that the anger, the power, and the voices that we see turn into votes, because we can protest, we can fight, and we can be angry. But if we don't vote, nothing will happen."

In working with Fair Fight, Barnett's project will help fund efforts to challenge voter discouragement and disenfranchisement, support voter protection programs, and pursue legal action, as in the historic federal lawsuit against the Georgia Secretary of State and Board of Elections. Barnett hopes that the grassroots organized action will converge with this political action to bring real change in issues such as police brutality and discrimination.

"I think moving forward, it's imperative that we have the same youth who are marching and protesting and making it clear that we need and want change be involved and have a seat at the table in hopes to unify that change," he said. "I want to see that, and I want equality. I want a leader who listens to science and facts and will lead for all people, especially African Americans, because the system has been so unjust for too long."

You can buy a shirt to support his project at letfreedomvote.com. 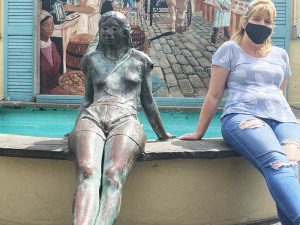