Escape Rooms in New Orleans: An Exciting Evasion of Indifference

The part that most people don't really realize about escape rooms is just how addictive they can be and what kind of a community and camaraderie has developed among escape room enthusiasts and escape room owners. For example, many of the escape room Game Masters will talk up their own rooms, but they'll be quick to point out rooms that you should try at other locations owned by competitors around town-they'll share information, tips, and even rooms themselves with each other, to give the consumers the best experience possible. When Rise Escape Rooms closed recently in Tickfaw (they wanted to focus on their haunted house), their three rooms went to Clue Carré Kenner and 13th Gate in Baton Rouge, respectively.

There's something new about every room, and each one is a fresh experience that builds upon a variety of skills (ciphers, memory puzzles, tactile puzzles, math, and spatial awareness) that you can take with you to your next adventure. It can become addicting. Megan Mouton, for example, is about to cross the 150-room mark. The other escape room owners and enthusiasts have similar counts, and it really shows their true love of the game.

Escape room workers, more commonly known as Game Masters, really love their jobs. Cody Stanga, an employee at Clue Carré, says that he came to Clue Carré because he was an enthusiast who had friends that worked there, but he stayed because he loves "the feeling of accomplishment" that players get that is evident "when entire rooms cheer" when solving a puzzle. There are also the insanely excited reactions that people have within the rooms, says an employee of the Mystere escape rooms, especially when they realize they are trapped with a live "zombie." These local escape rooms get a ton of customers with a sense of adventure, great spirits, and a love for New Orleans.

If you're looking to play here is where you can experience rooms in and around the metro area:

This particular Clue Carré location is great for locals, especially if you aren't a fan of parking in the CBD or Quarter. It's also a good place to begin your escape room experience, as these are the most straightforward rooms for beginners.

These rooms are New Orleans specific and great for entertaining out-of-towners because they have more immersive stories. There is no age limit, and games are enjoyed by everyone from children to grandparents, which is why they try to make sure there are places to sit in each room. There is a nice mix of generation 1 and 2 puzzles, the latter involving more technology.

Megan Mouton teamed up with local sports celebrity Drew Brees to bring two really fun shortened rooms for adults and kids looking for some extra entertainment at Surge Trampoline Park. This experience opened May 2019. There's Bookie, a casino game (one of the ones acquired from Rise) as well as an Alien adventure.

Clue Carré also has a "City Wide" Game that they play yearly. Teams hop into vehicles and travel across town to solve clues and meet agents at way-points to figure out the next location.

Everyone at Escape My Room is in full character the moment you walk in the door, which helps create a completely immersive experience. This is definitely for you if you love theatrical elements. Plus, all of the rooms tie together as part of the same story line, featuring the same family.

There's also a wonderful mix of Generation 1 and Generation 2 rooms here, and there is really something for everyone. It's a good idea that you arrive at least 30 minutes early to play in their super fun waiting room, which has costumes, props, and even a bonus mini-game-lagniappe, yo.

Children under 14 are welcomed with adult supervision, but you'll be required to buy out the whole room if you bring children under 12.

Escape My Room also debuted Saintsbone, an immersive hunt across the French Quarter in conjunction with the Overlook Film Festival. They've run the game a few times this year; it's really fun, and there are live actors every stop along the way.

The Mystere Mansion is housed at the Mortuary, best known for its Haunted House. These rooms are especially popular among those who love zombies, the occult, and scarier escape rooms.

New to New Orleans, but not escape rooms, The Escape Game has locations all over the country. They recently opened their French Quarter location a few months ago. The rooms contain some of the most intricate games around and have features that will have your jaws on the floor when you find them. Also, The Escape Game features straight-forward games that are not scary, which is good for team-building activities, especially since they have one of the only rooms (Playground) in the city that can hold 12 guests.

If you have the urge to explore more, there are also six rooms at 13th Gate in Baton Rouge. They recently acquired Rise's other two rooms, Spellbound, a magical witches lair, and Hijacked, where you're on board an actual airplane-yes, an actual airplane.

The North Shore has its fair share of rooms as well: Escapology in Covington and Trap House in Slidell, among others.

Additionally, Escape My Room recently opened the newest escape room in the city, Escape Extinction, an immersive experience for animal lovers in the lobby of the Entergy Giant Screen Theatre at the Audubon Aquarium of the Americas, called Escape Extinction. Groups of 12 can be accommodated every 15 minutes, when they'll board the SS Audubon, an advanced research vessel on expedition to save sharks.

For more information and for a breakdown about every single escape room offered in New Orleans, visit greatestescaperooms.com.

The Krewe of Cork parade is coming up--a parade that honors indulgence even more than most. The krewe was founded in 2000 and celebrates wine and food, with a walking parade through the French Quarter each year, two Fridays before Mardi Gras Day.
Krewe members dress up... 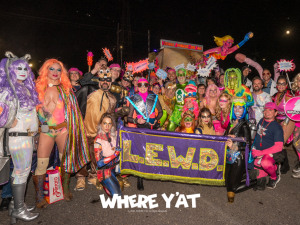 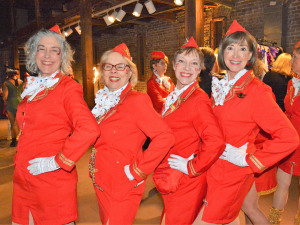 King Cake and Cocktails for a Cause at the Ogden

At the "King Cake Walk and Cocktails at the O" Thursday night, the Ogden Museum of Southern Art helped guests gear up for Mardi Gras while also raising money for the museum's educational programs, which include youth art camps, workshops, museum visits, and school programs. In addition to trying king cake from some of the best bakeries in town and voting for their favorites, guests could enjoy sipping cocktails; shopping for...