Pure power; that's the only way to accurately and succinctly describe this piece of musical history. The Fillmore was filled to the brim with metalheads and non-metalhead viking metal enthusiasts enjoying the bands and enjoying the signature drink of the night: The Blue Khaos. At The Gates changed the atmosphere of the massive room from celebratory to melancholy with their brand of droning doom. Their long, hollow, sorrowful notes wafted slowly and painfully from the speakers which were shrouded with creepy black and white artwork. Despite the depressing tunes, the band was more than happy to interact with the crowd just after their set by throwing picks and drumsticks to a lucky few in the front row.

Arch Enemy's vocalist Alissa White-Gluz is a beast of epic proportions. Full stop. Arch Enemy took the stage at level 11. Guitars ripped old school riffs. Alissa's shocking blue hair thrashed and crashed like waves as she growled in a powerful manner, headbanged, and leapt from the drum riser over and over again. She brandished her bat wing sleeves as she crept along the stage like a werewolf stalking her prey or weilded the mic stand like a spear ready to be thrust through your heart. Arch Enemy is intense in so many ways, but at the end of they day, it's Just damn good metal.

Amon Amarth took the stage to the tune of "Run to the Hills" by Iron Maiden, and perhaps we should have heeded this warning. The band dressed in matching black t-shirts surrounded a gargantuan glowing viking helmet complete with fifteen-foot tall horns on which sat the drum kit. The highly-recognizable vocalist Johan Hegg sported a beautifully-carved drinking horn on his hip which swang around him as he paced the stage, taking to the risers to scream over the tops of the heads of his most ravenous fans. He's an imposing man, but he explained how happy he was to be performing in this great city. The band powered through hits like "Runes to My Memory," "First Kill," and, of course, "Guardians of Asgaard." You could feel the floor bounce as the mosh pit started up. Johan would beckon everyone to jump up and down with him which shook the floor even more, the chandeliers above head vibrating from the force. Not only was Amon Amarth visually spectacular, they brought out some characters to join them like a behorned, shrouded creature with glowing green eyes and two warriors who battled each other with swords and shields.

It's no wonder that Amon Amarth has such a wide fan base. Their show is what dreams, or nightmares, are made of. 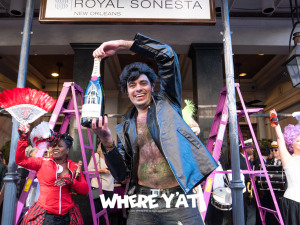 Greasing of The Poles 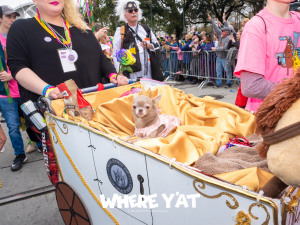 The Krewe of Barkus rolled through the French Quarter Edward VII "Eddy" as King of Barkus on Sunday, February 16, 2020.