New Orleans was built around the Mississippi River, and as long as there's been a city here, people have been looking to travel up and down the river—and across it. Because of rough conditions from the river itself and the nature of the dirt around it, a clay-rich muck sometimes referred to as gumbo soil, engineers were unable to build a bridge across the Mississippi in the area until the Huey P. Long Bridge opened in the 1930s. Here are some of the ways people crossed, and still cross, the mighty Mississippi in New Orleans.

The bridge known today as the Crescent City Connection is now an iconic part of the New Orleans skyline and an essential tool for thousands of commuters going to and from the Westbank by car and public bus every day. It was first opened in 1958, when it was known as the Greater New Orleans, or GNO, Bridge, as some longtime residents of the city still know it. Christened with a mixture of liquors from nations that trade through the Port of New Orleans, the bridge was at the time the longest cantilever bridge in the United States and opened the Westbank to further development by cementing its ties to Downtown New Orleans.

As of 1988, amid rising commuter traffic, the current second span was added to the bridge, splitting eastbound and westbound traffic. A public contest was held to select a name for the combined bridge system, and a fourth-grade class at Metairie's St. Clement of Rome School submitted the winning entry of "Crescent City Connection."

While a toll was long required, that was eliminated in 2013. Carrying the highway known as U.S. 90 Business, it's still the furthest bridge downriver on the Mississippi and often ranked among the highest-traffic bridges in the country.

This rail-and-auto bridge, crossing the Mississippi in Jefferson Parish just a few miles from New Orleans, was opened in 1935, as the first Mississippi span in the state. It was named for Long, the notorious governor-turned-U.S. senator who backed public works projects that transformed the state but was known for his strict control over Louisiana institutions. Long was assassinated at the state capitol in Baton Rouge just a few months before the bridge opened.

At the time, the New Orleans Item newspaper waxed poetic about a farmer who had "never been higher in the air than his hayloft" taking the bridge and for the first time getting "a panoramic view of the land on which he lives and toils." It was then the longest railroad bridge in the world and reduced the need for railroad traffic to cross the river by barge or ferry.

While much automotive traffic would later migrate to the Crescent City Connection closer to Downtown New Orleans, the bridge was still widened in 2013 to add an additional lane of travel for cars taking U.S. Highway 90 across the bridge, with the addition of roadside shoulders and wider lanes to improve safety.

Long before there were bridges across the Mississippi, people and cargo crossed the water by ferry. While Native Americans had rowed across the river long before colonization, the first post-colonial commercial ferries began operating between Algiers Point and the French Quarter area in the 1820s, harnessing steam power to swiftly cross the river.

For more than a century, until the Huey P. Long Bridge was opened, ferries and badgers were the primary way to cross the river, with some even equipped with deck-top rails so train cars could roll on board. Since the opening of the Huey P. Long Bridge and what's now the Crescent City Connection, crossing via the bridges has become the norm, but regular ferry service still runs across various points along the Mississippi in Louisiana. This includes the public ferry from Algiers Point to Canal Street, which is popular with both commuters and tourists, and the ferry from Lower Algiers to Chalmette in St. Bernard Parish.

During the 1980s, in time for the 1984 World's Fair, New Orleans introduced a distinctive way to cross the Mississippi: an aerial gondola system known as Mississippi Aerial River Transit, or MART, backed by investors including Mardi Gras float kingpin Blaine Kern. The system, which transported riders in small cars pulled along cables between towers on each side of the river, was initially only for fairgoers. It was designed to provide not only alternative transportation from parking sites on the Westbank to the fair, in what's now called the Warehouse District, but also an aerial view of the river, city skyline, and nightly fireworks at the fair.

Like other aspects of the World's Fair, attendance was much less than expected, and while the system was briefly kept in place for commuter use after the fair ended, it was soon shut down amid continued low ridership. After initial plans to relocate the system to Corpus Christi, Texas, for tourist use, and hopes by Kern that it could transport tourists to Mardi Gras World, it was ultimately torn down in 1994 after complaints by the Coast Guard. Some of the cars were sold for hunting and fishing shelters, and some were bought for the Olde N'Awlins Cookery to use as dining booths before being resold to benefit the LSPCA.

When I took my first plane flight to London, Paris, and Rome in 2016, I took my Martin Backpacker guitar, which I had gotten from late Advocate Contributing Journalist Mark Hunter, on board. I'd never had a beer on a flight before, so I figured that I would relax for the... 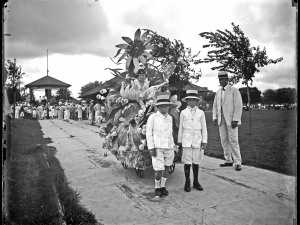 Cancelling Carnival: The Times That Mardi Gras Was Called Off

Few things are as synonymous with New Orleans's identity as Mardi Gras. While Mobile may have been the first city in America to celebrate Carnival, popular culture recognizes New Orleans as the epicenter of American Mardi Gras, because traditions such as parades with floats and throws originated here. So when Mayor LaToya Cantrell announced on November 17, 2020, that no parades are allowed to roll for Carnival 2021...