A Requiem for the Most Changed Neighborhoods: Gentrification in NOLA

Unlike many cities that experience small pockets of change in different neighborhoods, New Orleans has undergone a massive wave of gentrification-seemingly overnight.

After Hurricane Katrina, many people flocked to the city. In addition to do-gooders who eventually settled permanently, investors also jumped at the opportunity to buy land and properties inexpensively. As a result, many homeowners were unable to return.

The new influx of white, Asian, and Hispanic transplants not only changed the demographic of New Orleans (since Katrina, there are 100,000 fewer black residents living in the city), it also changed the culture. Local dialects have shifted, and some traditions have vanished.

Although the word "gentrification" typically carries a negative connotation, many residents have been pleased with the changes. Transplants are welcome throughout the city, especially because they bring more business for store owners and usually direct the city's attention to unacknowledged problems, such as potholes or abandoned buildings. However, too much of anything can cause problems. Currently, New Orleans anticipates raising property taxes, instead of stabilizing them, which will push out long-term residents. Ultimately, it is up to the city, not to individuals, to protect its inhabitants.

Short-term rentals are also hurting local homeowners. AirBnB gained momentum in the years after Katrina. The company welcomed tourists-maybe a little too openly-into the city. While these visitors boost business, they demand a lot from small neighborhoods.

Without gentrification, New Orleans may not have had enough resources to recover from Katrina, but, well over a decade later, the redevelopment is no longer needed to keep the city afloat. And now, the changeover of homes from natives to newcomers remains steady.

Each neighborhood in New Orleans is experiencing a different side of this issue. Below are the most changed communities that have adapted to this transformation.

The Bywater was one of the first areas to witness gentrification. Now, it is hard to visit the neighborhood and imagine anything other than a hub of young, hip transplants, but this colorful area once was pallid.

Despite how it may appear, the Bywater has not been completely glossed over yet. The local sports bar Markey's has existed in some form or another for at nearly 120 years. In 1947, it adopted the name Markey's, which has stuck until today. Many frequent the bar for food, drinks, and sports games, honoring its history and traditions, perhaps without
realizing it.

Immediately before the first wave of gentrification, there were a few restaurants that popped up and have stuck around until today. In 1998, Elizabeth's first opened as a small diner in the Bywater. Four years later, Bacchanal appeared in 2002. Both locales have remained popular icons in the city.

Of course, even more spots have come about in the past decade. It seems as if a new trendy restaurant has appeared every couple of years. First there was Satsuma Café in 2009, then Pizza Delicious in 2012, Bywater American Bistro in 2015, and Parleaux beer lab in 2017. There are already numerous small construction sites around, which indicate that new bars and food spots will be opening soon.

The Marigny has seen splash over from Bywater's transplant community. Although not as gentrified as the Bywater, a similar clientele has begun to appear, looking for equally young and fashionable milieus.

If the Bywater claimed the hipsters, then Mid-City took the families. Mid-City, now a fairly affluent area, has seen a 20 percent drop in African American residents since 2000. There have also been a large number of new coffee shops and restaurants that appeared in the past ten years, including the Station, Monkey Monkey, Clesi's, and G's pizza.

The neighborhood is not known for its food, though. Mid-City's value comes from City Park, which may as well be the residents' communal backyard. Even more appealing are its short commutes to other parts of New Orleans.

As rent continues to rise drastically, the area is developing a strong community of transplants. The trade-off is that old businesses are starting to leave the area. This fall, Trep's auto shop, which has been in Mid-City for more than 70 years, shut down. Mike's bar has taken the stage as the current "oldie-but-goody," having been the local bar for the past 40 years. Neighborhoods around Mid-City have also grown more popular.

Even though the main stretch of Freret has been redone with trendy restaurants and coffee shops, the neighborhood as a whole has found a balance of old residents and new. Fernando, who has lived here for 16 years, laughed when he recalled that a woman warned him about the neighborhood when he first moved. "It was what we could afford back then," he said, "but right now, if I had to buy here, I don't know if I could afford it." Despite the changed area, Fernando noticed that a lot of homes belong to the same families that owned them before Katrina. These homes are still being passed on to new generations.

On the streets parallel to Freret, many African American families carry on as if the high-end boutiques and restaurants weren't around. When asked how the neighborhood had changed in the past 30 years, one mother said that the only big change she could think of was the school systems. Another man said that he had been living in his house next to Freret for his whole life, and he had no plans to leave.

"I think it's good," Fernando said in response to the new businesses that had appeared. The reputation of the area has completely transformed for the better. In the last decade, home prices near Freret have nearly doubled. The rent increases will likely lead to homes changing hands in the next few years. But long-term residents who have kept their houses post-Katrina seem confident that nothing will cause them to relocate.

There is a clear sense of community in Tremé. Children play outside, while older men sit on their porches talking and drinking cold drinks. Cars slow on every corner and wave to individuals on the street; their families have been here
for years.

Tremé, often known as America's oldest African American neighborhood, has a long history. There are frequently second lines and live music performances in the streets that go late into the night. Only within the past decade has Tremé seen a stark increase in its white population.

Residents of Tremé agree that the new tenants in the area are not a problem. Those who have lived in Tremé for years welcome transplants of different races. The bigger burden, they say, is the rise in AirBnB. The short-term rental service has elevated property, and created a sense of emptiness in the neighborhood.

George, a resident of the area, said, "We have a lot of implants from other states and other cities, and they just try to thrive off the culture and try to figure it out for themselves. It's hard to grasp if you're not from here. It seems all fine and dandy, but those who are doing it are putting in a lot of time and effort." Perhaps one day this historically black area will look and feel completely different, but, in Tremé, the process of gentrification has only just started; the end is hard to predict. 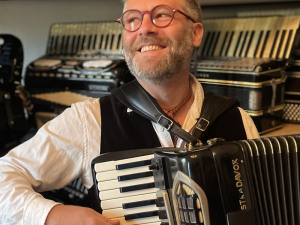 The accordion, affectionately known as a "squeezebox" due to the method of playing it, has become a worldwide cultural icon. An extremely eclectic and diverse instrument, the accordion is associated with everything from Parisian cafés to mariachi bands and Polish polkas. And, of course, we have a very strong accordion presence here in Louisiana, due to the prevalence of Cajun and zydeco music in Acadiana. Formerly relegated to the... 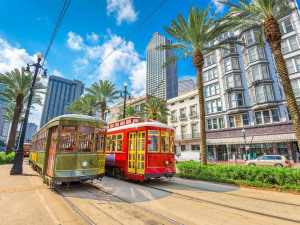