Chef Amy is no newcomer to Copper Vine Wine Pub's kitchen. She's been there for a long time crafting dishes that have garnered headlines. Now, she is making her own signature dishes that have been peppered throughout the dinner and brunch menus.

We started off our Copper Vine culinary and cocktail journey with the Duck Fat Fries, Brussels Sprouts, a Charcuterie & Cheese Board, and the brand new Pork Belly & Corn Fried Oysters. The oysters were particularly wonderful with a crispy outside that complimented well the somewhat dill-heavy oysters. You'll never see me talk about dill in a negative way. The pork and oysters were covered in a Crystal Hot Sauce glaze and had buttermilk dressing on the side. For this course, I imbibed a Rye in the Morning cocktail with an excellent combination of Basil Hayden dark rye whiskey, Montenegro, coconut syrup, sweet Vermouth, and bitters. Each ingredient was easily identifiable and meshed oddly well together.

The mains included Chef Amy's Smothered Rabbit & Mushroom Fricassee served hot in a cast-iron skillet with a large, buttery biscuit in the middle of it. The fricassee was surprisingly herbaceous with a healthy dose of thyme. The Herb Roasted Mushroom Pasta was made extra rich with the addition of a soft-poached egg that glazed the al dente pasta in fresh yolk to soften it when punctured. These savory dishes went nicely with the light, bubbly, and crisp Kombucha Cup cocktail featuring Big Easy Bucha's Basin Street Blues kombucha and Pimm's.

Not to be outdone, the dessert was as much spectacle as it was a seasonal treat. The bread pudding was egg nog inspired with rich, cinnamon whiskey sauce bubbling hot atop the bread. It was also served in a cast-iron skillet for that homey touch which is especially lovely on a cold night.

The Krewe of Barkus rolled through the French Quarter Edward VII "Eddy" as King of Barkus on Sunday, February 16, 2020. 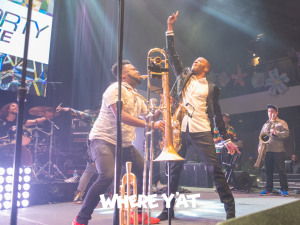 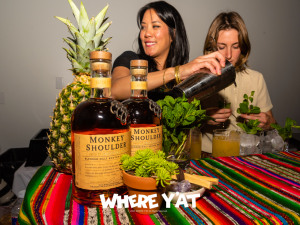