The 27th annual Lundi Gras Festival, hosted by the Zulu Social Aid & Pleasure Club, will be held on February 24 in Woldenberg Park, along the New Orleans riverfront. Lundi Gras Festival was founded in 1933 by George Rainey of Zulu and Ms. Karen Noles of the Audubon Nature Institute. The celebration is held the Monday before Mardi Gras and features Zulu float characters as well as coincides with the arrival of King and Queen Zulu.

The one-day event attracts upward of 150,000 folks every year, including children. As a result, in 2001 the Club introduced a Zulu Children's Village that allows children to express themselves creatively through art, music, and drama. Not only does the Lundi Gras Festival keep the culture of New Orleans alive, but it also benefits the local economy. According to the University of New Orleans, the festival's economic impact was estimated to be 5 million dollars last year alone.

Lundi Gras Festival is a festive day full of food, music, and arts and crafts. The festival will feature headliners such as Rockin Doopsie, Big Al Carson, JazzMen Brass Band, and the Bayou Players in addition to a number of local entertainers. There will be over 20 food vendors, all cooking up cajun classics like crawfish and jambalaya. This event is free and open to the public.

It's summer. That means it's the season for road trips. Whether you travel for business or just need a break from the monotony of quarantine life, chances are, you'll be hitting the old dusty trail in the next couple months. When you do so,... 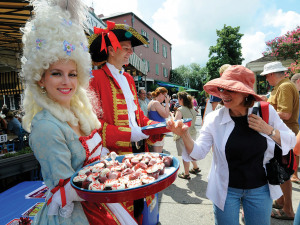 Let Them Eat Cake and Gumbo: A History of Bastille Day in New Orleans

New Orleans has always had a unique mix of cultural and ethnic backgrounds that have helped shape the city's present identity. However, there might not have been a New Orleans—or even a Louisiana, for that matter—if it weren't for France in 1718. Although the Big Easy is not officially part of the Francophone community (that's more the Acadiana region of Louisiana), no one can deny the lasting impact the French left on New...

Racist Monuments Still Prevalent in Louisiana and Beyond

The Southern Poverty Law Center has updated their 2016 report Whose Heritage?, to include and identify a map of 114 Confederate symbols that have since been removed, along with the 1,747 that still stand. "The Civil War ended 154 years ago. The Confederacy, as former New Orleans Mayor Mitch Landrieu has said, was on the wrong side of humanity," the report reads. "Our public entities should...