Where to Dip Your Chip 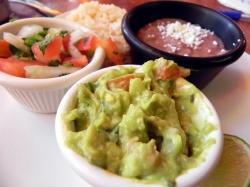 Due to its overwhelming presence at football games, guacamole has become one of the most populardips with Americans consuming millions of pounds of avocados during every season. I can't help wondering if the ancient Aztecs, who first created guacamole sometime in the 16th century, carried around bowls of the luscious green stuff during their favorite pastime ullamaliztli (a highly difficult game where the object was to get the ball through the stone hoop, a task so difficult that if it was accomplished, the game would be over. Additionally, the ball couldn't touch the ground and players couldn't hold or even touch the ball with their hands – only their elbows, knees, hips and head!). Would fans spout profanities and heave their empty guac crocks at the players on the losing team? Did their wives nag them for causing such a mess and breaking their best bowls?

Regardless of my inane musings, and a strange lack of excellent Mexican cuisine in the the Greater New Orleans Area, I do know a few local spots where avocado fans can dip their chips into fresh, delicious guacamole without shoveling out too much “guac” of their own. (Did you know that guac is also slang for cash? Me neither...)

One of the most exciting locales is the brand new “Cal-Mex” restaurant on Magazine Street dubbed Del Fuego. Owner and chef David Wright not only offers a mind-boggling array of  mescal and tequila, he has also brought my beloved Mission burrito to New Orleans. I promise to wax poetic about seeing (and tasting) a Mission burrito in the Crescent City another time, but for now what you really need to know about is their guacamole. Del Fuego doesn't just offer a fresh bowl of that creamy green stuff with tortilla chips, here you can customize your guacamole with an array of toppings (an additional .50 cents each) or simply get it "loaded" with all the fixins which include chicharrones (cracklins), diced tomato, pickled onion, pomegranate seeds, queso cotija, rajas (roasted poblanos), pepitas (pumpkin seeds) and bacon...yes, I said bacon and cracklins. To top it off, the guacamole is served with still-warm corn tostadas that keep coming till you run out of dip.

Another recent addition to the Mexican food scene is Mizado Cocina on Ponchartrain Boulevard. Chefs Hans Limburg, Gary Darling and Greg Reggio, “The Taste Buds” who created Zea Rotisserie and Semolina, have put their heads together once again to create this elegant restaurant on the edge of New Orleans and Metaire, delighting diners with creative cocktails and an eclectic mix of Latin cuisine. Along with a wide variety of salsas and ceviches, Mizado has been regaled for its delectable collection of guacamoles. Their “tradicional” version with Haas avocados and salsa roja is created table-side by your server, but the other three are what folks seem to be raving about. There's a Guacamole Pistachio served with … well … pistachios, a Guacamole India made with avocado, bananas, dates, cashew chutney and cumin, and if that doesn't blow your ethnically-fused mind, they also offer a Latin Tuna Tataki (a distinctly Japanese dish) with Gulf tuna, guacamole, ponzu and salsa.

On South Carrollton Avenue there's a great Mexican joint that, in my humble opinion, just doesn't get the attention it deserves. Opened a few years back, Panchita's Mexican Criollo Cuisine offers authentic Mexican cuisine at an incredible price. Pop in and order their Chile Rellenos or Enchiladas de Mole, either of which will set you back less than ten bucks. All of their entrees are served with smoky black beans, fresh salad and rice, not to mention that as soon as your butt hits the seat, a server will come around with complimentary tortilla chips with two types of salsa. Although Panchita's doesn't tend to serve guacamole on it's own as a dip, feel free to add a cup of their fresh, avocado concoction to any dish for under a dollar!

Finally, it would be neglectful (and just plain foolish) to leaveJuan's Flying Burrito off of my list of sources for great guacamole. Since 1997, Juan's has been bringing both Tex-Mex and Cal-Mex flavors to New Orleans. Regardless of location, Juan's offers a fresh, traditional guacamole along with delicious burritos, nachos, quesadillas, tacos and enchiladas … most of which that include their own, quirky twist. For example, try The Luau Quesadilla with grilled Gulf shrimp, applewood smoked bacon, pineapple salsa and jack and cheddar cheese or sink your teeth into Mardi Gras Indian Tacos featuring roasted corn, pinto beans and grilled squash. Whatever you do, don't forget the guac!