The original grain-wheat-and carbohydrate-free diet was developed in the 1970s by Dr. Robert Atkins. The Atkins meal plan focused primarily on high intake of protein, fish, dairy and eggs, with lowered intake of wheat and carbs during the transition period, to no wheat and carbs whatsoever once acclimated to the lifestyle. Also limited in this meal plan were all grains, rice and corn, due to their starchy properties and low nutritional value.

When developing the diet, Dr. Atkins used himself as the initial guinea pig to combat his own overweight condition. In his shed pounds he also saw dollar signs. His results spawned books about his discoveries, the sale of prepackaged meals and a blast of other paraphernalia. With the gluten-free bandwagon rounding the bend and a rise in cases of celiac disease, wheat and grains are getting a bad rap once again. Even those who can stomach them are being told they could have an allergy based on symptoms of belly bloat and the general blah feeling following a bread- or grain-accompanied meal. The catalyst for this go-around, however, is genetic modification, a debatable topic at which it’s easy to point a finger.

Genetically modified foods have been discussed in many scientific, medical and health-based forums, and not all scientists or doctors agree that they are not good for you. Recently, I personally researched a case study based on genetically modified corn. Since DNA changes in plants are expressed as proteins, and allergenic proteins can cause eosinophilic disorder, symptoms common to those suffering from celiac disease are presented and used to investigate further, whether with allergy tests or endoscopy. Eosinophilic disorder is characterized by the increase of eosinophils (white blood cells) in the mucus-lined openings of the body. These immune system heroes gather here as well as in the gastrointestinal tract to eradicate the foreign proteins from genetic alterations. Irritability is an excessive direct response to stimuli, so this process can lead to swelling in the gut, stuffy nose, scratchy or sore throat and arthritic pain and edema. Since products of food biotechnology didn’t show up in supermarkets until the early 1990s, it’s understandable that diets prior to 1990 cut carbohydrates. Carbs not metabolized by the body’s energy turn into sugar, and will do so despite a compromised genetic makeup. But now, 10 years later, we are seeing increases in gastrointestinal disease and disorder, leading those who exhibit these symptoms, but do not have celiac disease, to assume that they are gluten intolerant. Opting to cut out all modified foods could potentially keep additional symptoms at bay.

Kirsten Rinck, Pastry Chef at Greatfull Meals, formerly Fit Camp Meals, is a model and certified personal trainer. Based on the latter two alone, she is bound to be fit, but Kirsten attributes the lack of gluten and wheat in her diet to her staying in shape. Confessing to having eaten like an athlete while in school on a soccer scholarship, she discovered a significant decrease in belly bloat once she removed wheat and gluten from her diet. She credits the Fit Camp Meal plan (prior to its recent re-branding) with her dropping 20 pounds in 3 months. Inspired by her new views on eating and determined to stick with the diet, she took a position in the kitchen of her family’s prepared food business. “Greatfull Meals is a family operation that started on the North Shore. The business has seen incredible growth and now stretches its reach to Slidell, Baton Rouge, and New Orleans. The recipes are Paleo-based, made with all fresh, never frozen fruits, meats and vegetables. I sweeten my baked goods with things like honey and maple syrup, and all of the pastries are gluten-, grain- and dairy-free,” Kirsten explains.

I ask how anything lacking those key components in the science of baking can be good, to which she replies, “It definitely is an acquired taste. For example, I use coconut oil in place of butter. I know most people might scoff at that, but eating clean takes some adjusting to, especially if all you’re used to eating is processed foods.” She goes on about Paleo soft pretzels with pumpkin hummus and how the pretzel dough can also be used for English muffins and pizza crust. Just the thought of these items—rather, their full-powered, floured counterparts—makes my belly swell.

I asked her about the wheat belly epidemic, and she explains, “Wheat belly occurs when your body attacks the gluten and treats it as a foreign protein. Wheat is addictive because the glutens are opioid-like proteins the body struggles to break down. This is why a person initially feels euphoric when eating foods containing wheat, but a few hours later feels tired and seeks a gluten fix. Within one week of eliminating wheat from the diet, most people report having more energy, better moods and less bloat. We can heal our bodies from within, as you truly are what you eat!” 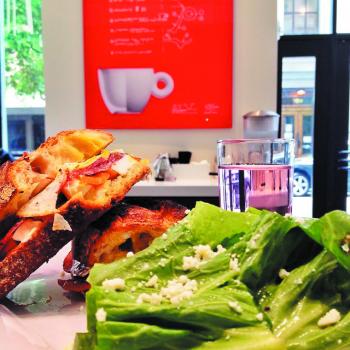 Funny to me, we covered all of this over an indulgent breakfast at Merchant. I ordered a hearty fruit plate and cappuccino and she ordered a coffee with the Loxsmith: salmon, capers, shaved red onion and goat cheese on whole grain bread. Befuddled, I questioned Kirsten about the bread on her breakfast plate and was surprised to learn that Merchant has added gluten-free bread options per her suggestion. Had I known that, I wouldn’t have opted for fruit.

Another coffee shop hip to gluten-free offerings is HiVolt in the Lower Garden District. Amazing vegetarian and vegan options share the pastry case with things like gluten-free muffins, bagels and breads. While you have more options for gluten- and wheat-free items at lunch and dinner, you can always remove the bread from any sandwich (essentially making it a salad) or wrap that burger in lettuce instead.