Tales From The Quarter: The Essentials of Service

"When are you going to get a real job?" my customer asked. After I resisted the urge to pistol-whip him with his drink, I opted instead to serve his beer with a side order of righteous reasons why my job was more than real. As a lawyer, he seemed to actually weigh the merits of my case, especially when I concluded with how much money I earned as a bartender/waitress. After my summation, he confessed to not liking his own profession.

That was about 40 years ago in Mobile, Alabama. The hospitality business was not the most hospitable environment to work in, especially for women. My profession was generally undervalued, and our status ranked low. Oh sure, we were often beloved by our regular customers, but just like housekeepers/maids, we were not considered equals. I must give credit and appreciation to my circle of friends back in those "old days" of Mobile—they didn't give a flip whether I was a banker or a bartender, and this meant the world to me, since nearly all earned their livings in professions considered "professional." They were quite the smart set. Perhaps that was why they knew better than to judge the worth of my labor. But snooty people did abound outside of my clique of friends.

Loved as I was by my mother, she was less than thrilled at my career choice, and I know she was initially embarrassed that I was a waitress (especially my bartender or cocktail server gigs). Back then in Mobile, the gum-chewing heart-of-gold floozy stereotype loomed large in her mind. Gunsmoke was a television favorite then, and my serving cocktails had her picturing me as Miss Kitty, the tough saloon gal (if this character were in Deadwood, she, in all reality, would have been a prostitute). Oh, Mom knew better, but still, slinging hash wasn't quite what she had hoped for. Dad, on the other hand, was slightly less concerned with other folks' opinions and simply told me to "be the best at whatever I did."

In those early years, toting a tray held little interest to me. I was young, unmotivated, and, frankly, entered the food and beverage world because I was qualified for little else. (No, this is not to denigrate restaurant or bar work—it would take a tome to list the skills and superpowers required for that work.) The point is, I knew nothing about typing (this was well before computer skills were even an issue) or bookkeeping. I bypassed trade school and never even entertained a college endeavor. But jobs were plentiful in the food and beverage realm. And jobs I got, and jobs I quit, and many resulted in termination (and usually with good reason).

One of my first gigs as a waitress was at Howard Johnson's. Now, many of you may be too young to have enjoyed their 28 flavors of ice cream, famous clam plates, or liver and onions. I was practically weaned on their chocolate chip and peppermint ice cream cones. So, of course, I wanted to work there when I grew up. Well, I take liberties with the term work—I was there to eat, and eat I did. I had no interest in tips, so I turned most of my tables over to an energetic waitress who was actually there to earn a living and not an expanded waistline. Needless to say, my tenure was brief.

However, as the years passed, I began to take my dad's advice and make the most of a job. My personality (a bit loud, a cut-up, always going for the laughs, which, for years, teachers and my parents had tried to tame) finally found its niche. Entertaining customers, making them laugh, and growing friendships over a tray of food (or across a bar) came to be my forte. I still lacked the polish required of fine-dining restaurants, but I preferred casual, preferred talking to my people more than up-selling a wine list. And what I lacked in interest to do the hard sell and to maneuver customers to spend more, I made up for with repeat customers and loyalty that worked both ways. Also, while my wine knowledge and finesse was merely adequate, my commitment to sanitation went ballistic. I was the green/clean police of constant cleaning. I could dismantle a Hobart dishwasher; I was the nemesis of grease-clogged filters. This appealed to managers but annoyed the heck out of coworkers.

Pushy (pain-in-the-ass) as I was with a soapy sponge, I was fortunate to garner lifelong friendships during those decades of tray-toting and beer-slinging. Those coworkers made each and every day for me a pleasure. I have found that a strong sense of camaraderie exists among those in food and beverage. We are generally considered outsiders by the more establishment-type workers. Perhaps we're respected more now than in my early days, but we are generally more free-spirited (not to say that we don't work our asses off) and less conventional. Example: tattoos are the norm in today's restaurants, but not so much in corporate work places. And perhaps it is difficult to view those who serve you as equals? Food for thought. Still and all, these days, anything culinary is newsworthy, and prior to COVID-19, entrepreneurs seemed to flock to investing in the restaurant/bar/coffee venues. More and more, folks seem to connect with food, be it cooking in or dining out. And with this, I feel our trade has been elevated.

I have to wrap this career up now, which isn't easy, as the better part of my adult life has been skating across greasy floors under a tray—and loving it. We are a tough breed who can multitask a dozen things at once and still make you smile. We serve up good times and wonderful memories. And I am proud to have served.

Extra, Extra – Read All About it: A Behind the Scenes Look at Being a Film Extra in New Orleans


(Extras on Set-- Lisa Salzer) From L to R, Lisa Salzer, Rebecca Fox, Jessi Higgins, Alessio Pasini, and Roxy Burns on the set of ABC's 1960s drama The Astronaut Wives Club at Chateau Golf Club Louisiana, especially New Orleans, has been the backdrop to many... 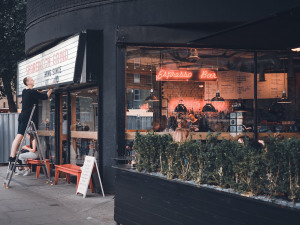 As we all know (or should), there is the fear of 50 percent of New Orleans restaurants closing mostly forever because of the pandemic (nola.com). That gives you, my optimistic entrepreneur in a fit of spontaneous enthusiasm, the chance to exercise an innate inclination to open your very own bistro, trattoria, café, joint, beer garden, boite, or gourmangerie. The word from your culinary visionary, advisor, and all-around restaurant... 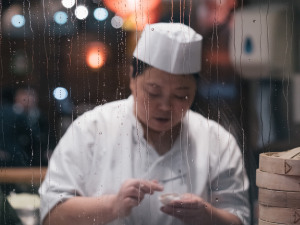 Tales From The Quarter: The Essentials of Service

"When are you going to get a real job?" my customer asked. After I resisted the urge to pistol-whip him with his drink, I opted instead to serve his beer with a side order of righteous reasons why my job was more than real. As a lawyer, he seemed to actually weigh the merits of my case, especially when I concluded with how much money I earned as a bartender/waitress. After my summation, he confessed to not liking his own profession. ...