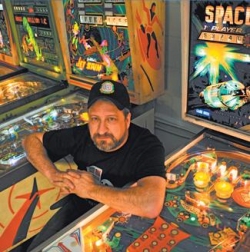 For at least half of the twentieth century, pinball was the king of arcade machines. The blinking, chiming machine commanded attention and made players fear gravity like no other game since; even The Who wrote a still popular song about the game called “Pinball Wizard.”

But, with the advent of video arcade games in the late 1970s then home gaming systems, pinball machines became money losers and were slowly pushed out of the entertainment market. Pockets of pinball machines could be found in bars, bowling alleys, and diners, but they were truly cared for by collectors who couldn’t stand to see them be destroyed. One such collector has put to good use his large collection of functioning machines.

“When I was a kid, we lived in an apartment in Fat City, and there was a pinball place called the Amusement Trolley," says Mike Perry, explaining how his collection began. "I would sneak out during the day and go play pinball. When I grew up, I came across an old game I used to play as a kid, and it was for sale. I made a deal on it, and it didn’t work. That was my opportunity to figure out how to get these things fixed. One turned into two, three, four…I had to figure out what I was doing with them. Somewhere along the line, I came up with interesting ideas on how to do it. That’s where the Mystic Krewe comes in.”

The Mystic Krewe of the Silver Ball is a community organization modeled after the eldest Mardi Gras societies, and their pinball-filled clubhouse called The PinChurch is their haven. “It’s a work-space, man-cave studio. It’s like a canvas where our group, The Mystic Krewe of the Silver Ball, works with technology and art. New Orleans is a city that’s got tons of secret societies and clubs. It’s in our blood! These social organizations were groups of people with similar interests and vocations, and they networked,” states Perry.

The PinChurch is located in an undisclosed, Katrina-abandoned church in Jefferson Parish that Mike Perry renovated himself; the neighbors don’t even know what the building holds. The PinChurch functions as many things; along with the dozens of blinking pinball machines ranging from 1931 to present day, it has a Pro Tools studio, a fully stocked repair/work shop, musical instruments, and audio/video recording equipment. The members teach classes for other members on anything that they have expertise in including machine repair, video production and editing, even staining glass. They can do in-house concerts, and are considering live streaming the shows online for non-members. Their possibilities are truly limitless.

“It’s one part secret brotherhood that help each other and do charity work, one part social organization, and one part business incubator. I wanted to create a group that rallies around collective interests in a space where we can work together. The objective of what we’re doing is to create a small, tight-knit group of people that learn and share. We’ve gotten at least three business ventures that have come out of this,” explains Perry.

Clearly, the epicenter of the Mystic Krewe of the Silver Ball is their love of the nostalgic game. “The pinball machines cover every era from the early days in the 1930s to the modern day. The early electro-mechanical ones are all just bells and whistles. We take this old technology, we try to understand how it works and fix it, and, in the process, we learn a lot of useful skills that we can apply in various other areas. Pinball is a good metaphor for our interests because it encompasses technology, culture, art…it seems like something that’s out of style but we appreciate all aspects of it. Pinball machines are a snapshot of American culture, and it’s a uniquely American thing. [The brand new Wizard of Oz machine] is super high-tech; the whole playing field is LCD lights,” says Perry about the lingering appeal of pinball.

Mike Perry recently hosted a tournament at The PinChurch in early February when the top players in the state competed to be named the Number 1 Pinballer in Louisiana. “The International Flipper Pinball Association is the official sanctioning body of [competitive pinball]. I applied to be the Louisiana representative and I started hosting local tournaments. This year was the first year with a state championship. The IFPA created an invitational event with 16 players in each state on one day. Eric Shafer won, and I came in second. We raised a bunch of money for a charitable organization. I look forward to holding more events,” says Perry.

There are bigger plans in the works for the public; Mike Perry is looking for a space that he can transform into a high-end arcade where his many machines can return to their glory days as public pinball machines. If you can’t wait until that time, however, and you like what The Mystic Krewe is all about, they are looking for a few good members. “We’re looking for people who say, ‘That looks cool; I want to be a part of that,’ not, ‘What’s in it for me,’” explains Perry. You can learn more about the organization and The PinChurch on Mystickrewe.com.

The days of pinball machines ruling the arcade may be over with, but that won’t stop the fanatics from frantically hitting the flippers, trying to keep a silver ball in play for as long as they can. “There’s definitely luck to it because you’re dealing with physics. It’s a good metaphor for so many things because it’s you against gravity, keeping the ball in play and trying to put it in productive areas of the playing field, and gravity is always going to win. We’re all going to die; the goal is to put ourselves in productive and entertaining playing fields, which is our life,” states Perry philosophically.