While 10 years have passed since Hurricane Katrina, FitLot, a local non-profit organization, has been working to help strengthen and equip New Orleans communities with free outdoor fitness parks. Beginning with the Flagship Park located at the Sojourner Truth Neighborhood Center on the Lafitte Greenway, FitLot is committed to transforming empty lots into free recreational parks within walking distance of most neighborhoods.

“We have been planning to build a bikeable network of outdoor fitness parks throughout New Orleans, connecting neighborhoods from the lake to the river,” said Adam Mejerson, founder of FitLot. “I spent a lot of time trying to figure out what to do with the vacant lots and blighted houses in the city after Hurricane Katrina. And fitness parks seemed like a great way to repurpose those vacant lots.”

Mejerson, who came to New Orleans in January 2006, spent four months gutting houses as a disaster relief volunteer in St. Bernard Parish. With the support of his father, he established FitLot in 2013 in an effort to revitalize the city’s communities, increase public awareness of health and improve the value of real estate in New Orleans.

“We would like to make a health model for New Orleans and make these parks as accessible to people as possible before expanding to other cities throughout the country,” said Mejerson. However, he explains that a construction date is contingent on funding and, presently, FitLot has raised only enough money for the cost of the equipment at FitLot’s Flagship Park. “Now we need to find a matching sponsor or donor to fund build-out,” he said.

Recognized as one of the initial contributing sponsors, Whole Foods, with its store on Broad Street and the ReFresh Project, will be only a three-minute walk down the Greenway from FitLot’s Flagship Park.

“We were happy to partner with FitLot early on and look forward to developing that relationship,” said Kristina Bradford, Louisiana Community and Media Relations Coordinator for Whole Foods. “Giving back to the communities in which we work and live is one of our core values. FitLot will offer many opportunities for the neighborhoods, especially for seniors.”

“We have been planning to build a bikeable network of outdoor fitness parks.”

In his vision for FitLot, Mejerson also plans to involve the neighborhood community to help build and landscape the park. This “community build day” will allow local volunteers to develop a sense of ownership of their neighborhood park.

“We ask the community to help organize a community build day where we build and landscape the park together in one morning,” said Mejerson. “Then we staff the park with a free neighborhood coach to teach people how to use the park once it is built.”

Since April 2015, Coach Milton Brown, a 30-year-old local EMT and firefighter, has been working with FitLot as a Neighborhood Coach, teaching free exercise sessions for youth and adults. “I help individuals push through their threshold and reach their goals,” said Brown, who has been instructing fitness classes every Tuesday and Thursday evening at the hydraulic fitness area located in City Park's Festival Grounds. These classes have been suspended in preparation for the construction of the customized Fitlot Park along the Lafitte Greenway. “I show them how to use the different pieces of recreational equipment while motivating them to exercise.” His classes are composed of various groups ranging in age from 13 to 55 years old.

“A lot of kids come out and are interested in improving their health,” said Brown. “They are very receptive. And I make sure the exercises are modified for the older adults. Even though the adults complain, after a few weeks go by, they get over the soreness from the workouts. And then the older adults don’t want to miss a group exercise session.”

Excitement in the Lafitte Greenway neighborhood grows as FitLot fundraising campaigns strive to finalize the building plans for Flagship Park. Supporters can make a donation to FitLot’s crowdfunding campaign and join this public health movement. With these groundbreaking developments in the revitalization of New Orleans, FitLot has established free outdoor fitness parks as a long-term project. With nearly 80% of all structures in Orleans Parish destroyed due to extensive flooding, now is the time for neighborhood communities to reap the benefits of FitLot fitness parks and focus on public health.

As Coach Brown often tells his students during his exercise classes, “Shoot as high as you can and believe in yourself. I promise, you will reap the rewards of good health.” 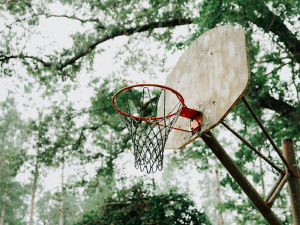