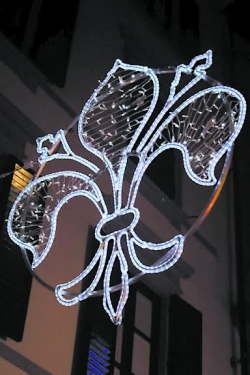 It’s everywhere. Plastered across signs, tattooed innocently onto a patch of forgotten skin, on flags, on restaurants; fleur de lis are everywhere. The city is almost overrun with them: fence posts, garbage cans, jewelry. Look for them. They’re everywhere.


But what do they even mean? What is this symbol that is so prevalent throughout the city? For so long, wandering tourists and family members had asked me what this meant, but, even as a long-term resident of New Orleans, I had no answer to offer them other than an enthusiastic, “Who Dat!”


After a long chat with a tattoo artist at Electric Ladyland on Frenchman Street, who explained to me that it was by far their most popular tattoo (even amongst tourists that wandered through their doors) and showed me books and books filled with the image drawn in every way imaginable, I was officially intrigued.
So I headed into the French Quarter with my research assistant to see what I could find out about this illusive symbol of my city.


“Well it’s a French symbol, you know that right?” says Robert Hoch, who works at the Louisiana State History Museum in the Cabildo off Decatur. “The French based it off of the lilies on the river, and since we were a French colony, we adopted it as well. On New Orleans’s 200th anniversary they had a contest to design a flag for the city and the fleur de lis was on it. It just stands for our French roots.”


A simple enough explanation, I was almost happy to take it and walk away. As an afterthought, I stopped by the carriages lined up at Jackson Square. The guides all stood lounging near their horses and shouting out prices to passing tourists. I figured if anyone would know the answers, it would be these people, so I stopped at a particularly nice looking gentleman and asked him. I put on my best tourist routine and posed my question, “What does the fleur de lis mean?”


“It’s a lily flower,” he said. His name was Howie Farrell and he was a tour guide with Mid City Carriages. “But it was also the symbol of Joan of Arc who is New Orleans’s patron saint. It’s even on her flag and the statue of her right down this street.” He pointed down Decatur to the large gold statue I’d never really looked twice at. “And it’s a Catholic symbol too, the Holy Trinity is represented in the three petals, and the bottom bits represent the French royal family.”


“After Katrina,” Farrell continued, “Bobby Jindal declared it the official symbol of Louisiana and Katrina recovery. Plus, there’s always the Saints.”


I was a bit baffled; this wasn’t the same story I’d heard at the Cabildo. Hadn’t I just been looking for a simple answer? Now I had two entirely different stories on my hands.


So then I contacted the History Department at Tulane University hoping to set the record straight once and for all. Lawrence Powell, PhD, who teaches a class on Southern History, sent me another baffling response, “Though fleur de lis has been a symbol of European monarchy (particularly French monarchy) for a long time, it left a searing impression on African American slaves during French rule.  The Code Noir (the French slave code) mandated that fugitive slaves be branded with the fleur de lis after capture, to stamp them as incorrigible runaways.”


Now I was in full-fledged detective mode. How could such a simple question warrant so many conflicting answers? I started asking around a little more intensely and I got responses that ranged from “Well, obviously it’s the symbol of the Saints,” to the truly ludicrous. One source even claimed that it was tattooed on French prostitutes or convicted felons in France. During a period of time during French colonization called Emigration Forcée, the French forced many of these criminals into their colonies they wished to keep a foothold in, mainly New Orleans. Perhaps contributing more than just a popular tattoo, these emigrants were said to have brought a general air of debauchery to the city right from its founding.


When discussing this conflict with a lovely shop assistant in the Quarter named Cat, I finally had my first breakthrough. “It’s just a symbol of the French monarchy. It’s in their coat of arms and on their flag—that’s why it’s also the symbol of Detroit, Michigan and other cities. They all used to be French colonies too.”
She seemed so sure, that I was mildly surprised. Until she sent me off around the block to a place I’d never heard of before to search for my own evidence.


The Historic New Orleans Collection is a beautiful, official marble building with a friendly elderly woman there to sign you in and helpful assistants that even pull your books for you. When I walked in with my question, they all blinked back at me, clearly overwhelmed by my question.


In minutes they pulled themselves together and started grabbing books off of shelves for me and pointing out a nearby Bourbon French flag, hanging happily and covered in those yellow fleur de lis. Within minutes I had been given four books and a brief history of New Orleans.


Two French-Canadian brothers, Bienville and Iberville (whose names you will recognize from their street equivalents), settled New Orleans in the name of France. Since the fleur de lis was on the French Bourbon flag, the fleur de lis was a symbol in this city from its exact moment of origin.


Louis the XIV, who was king at the time of the city’s settling in 1718, used the fleur de lis as his personal symbol (I was even shown pictures of him robed in gaudy gold fleur de lis from head to toe). When he died not long after New Orleans’ founding, the throne was passed to a Regent, the Duke D’Orleans (which is where the city obtained its name and laid-back lifestyle), who also had the symbol in his own family’s crest. The symbol has been here ever since, as well as almost every other place that has at some point been under French Rule.


Yet after all this research the only thing I could say with complete certainty was that the fleur de lis definitely came from our French colonization. Why it stuck around so long, why everyone I’ve ever met seems to own a piece of jewelry with it on there, why it’s the top selling tattoo in the city, remains to be explained.
But, who are we kidding, we all know what it really stands for.