Paris was but a keystroke away.  The whole trip was set up—a quick, fun, romantic and far away getaway with the wife.  Everything was loaded on the travel site—the air, the hotel, the credit card.  All that stood between us and moonlit strolls on the Champs Elysées was the “Enter” button.  But something made me stop.  Sure, Paris is the city of lights and romance but we were looking for something a little more…caliente.  More tango than waltz.  More Tabasco than Hollandaise.  More power ballad than concerto.  Yes, Paris is the capital of romance, but Madrid is the capital of passion.  So we decided to say au revoir to Paris and hola to Madrid.

We land on a bright February morning and after the requisite post trans-Atlantic flight freshen-up, we bound onto the streets and head for the Plaza Mayor, the main square in Old Madrid and try to pick up the city’s rhythm.  When I say rhythm, I am talking about the inaudible rhythm that Madrid emits.  It’s first evident in the Madrileños (Madrid native) themselves.  You can see it in their walk and how they speak with one another.  There is an openness and brightness as people greet you on the street and the energy of the city coming online at the start of the day is infectious.

And then there are the ubiquitous novios.  It’s difficult to walk more than a city block in Madrid without encountering two sweethearts engaged in everything from intense gazes into each others’ eyes to full-blown necking—right in the middle of the sidewalk.  Years of dictatorial oppression under the Franco regime have spawned a society of young lovers, completely at ease with P.D.A.

As Americans, products of a society where a nanosecond flash of Janet Jackson’s boob on TV causes a tear in the fabric of the space-time continuum, my wife and I at first were a little unsure about all the tonsil hockey we were seeing.  The words “get a room” were on the tip of my tongue but instead I grabbed my wife’s paw and we smiled and used the occasion to connect; the rhythm starting to feel more natural, more enrolling.

We arrive in Plaza Mayor, a massive public square dating back to the early 17th century which had been ground zero for bullfights, executions, pageants, and trials by the Inquisition.  Now it is home to numerous cafes, artists and—you guessed it—young couples who come to the most public of all places to display their unfettered affections. 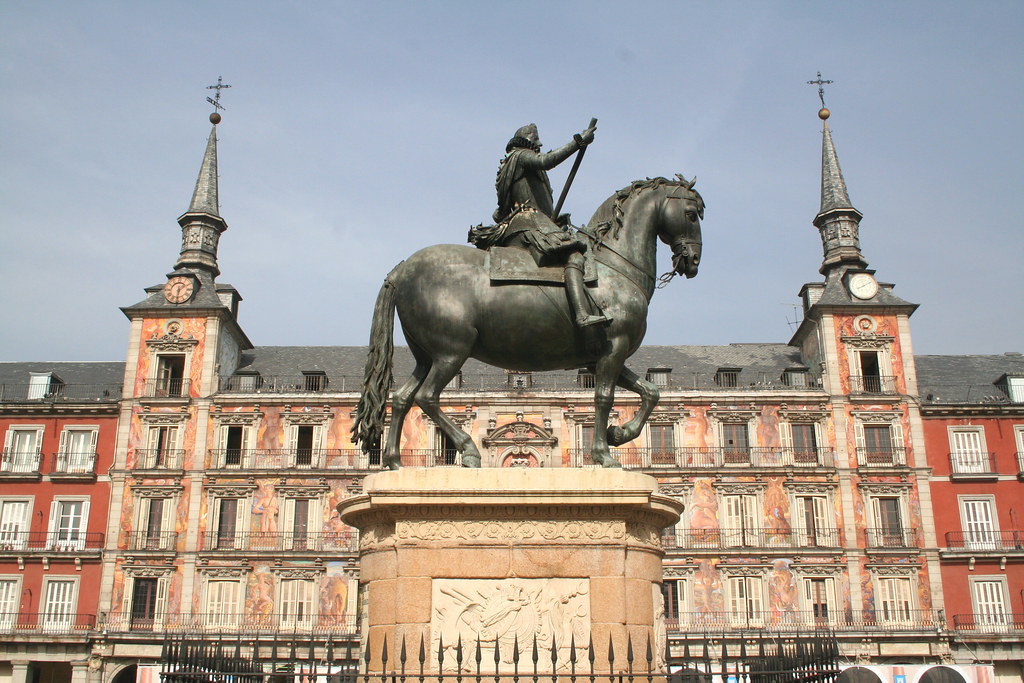 Beyond the Plaza Mayor is the Placio Real, the massive royal palace overlooking the Rio Manzanares.  The palace is not used anymore for royalty but still stands as an impressive symbol.  We walk around the outside of the mammoth palace and the sound of Flamenco music reaches our ears and we gravitate towards it.  In the middle of a circle of spectators, two street performers—Flamenco dancers—are entwined in an amazing and impossibly complex ballet of motion.  The man and women, both lithe and gorgeous, have the crowd mesmerized and the wife and I glace at each other with an unspoken acknowledgement that this display beyond passion and sensuality.  It’s downright erotic.   We barely make it back to the hotel without molesting each other on the Metro and pray that our room’s walls are triple insulated for sound.

It is 18:00 (excuse me, 6pm) and we are hungry.  We ask the concierge for a dinner recommendation and he flashes a smirk reserved for gringos like us.  It turns out dinner in Madrid happens a little later than we are used to (which would also explain why we were the only ones in the café at noon).  So we take the guy’s advice.  Step one:  at 10pm and we go stand at a bar and order tapas, small dishes of ham, tuna sandwiches, seafood salad on toast and other noshes and drinks at a bar down the street.  With the exception of black lung-inducing cigarette smoke, we are finally seeing the wisdom of their ways.  Step two:  around 11pm we follow a young crowd to yet another tapas bar and repeat step one.  Step three:  it’s midnight and now, finally, it is time to actually eat a formal sit-down dinner.  We wedge into a place that is packed to the gills, get a table and eat.  After dinner we make it to a Cuban club for dancing and mojitos but our jet-lagged bodies can only take so much.  The crowd disappears into the night, many to stay out until sunrise.  And so goes la vida loca for a young Madrileño. 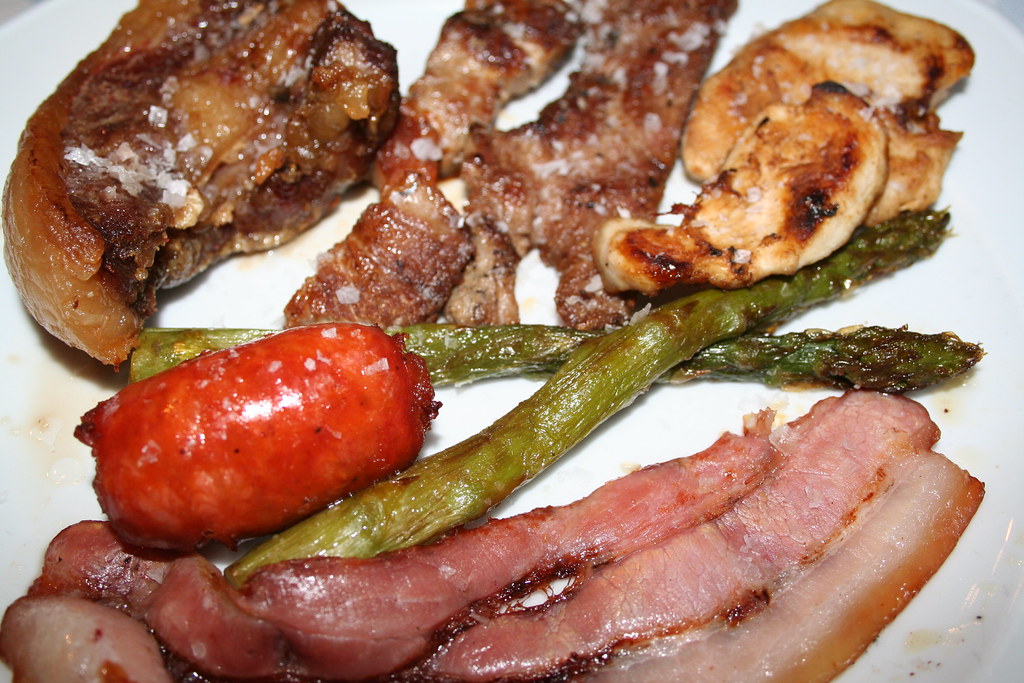 The next day, after sleeping in, we head to El Parque del Retiro which is essentially Madrid’s central park.  This gorgeous green space features a maze of paths and gravel walkways, many of which are populated by couples—you guessed it—making out and rolling in the grass.  A statue lined walkway leads to a picturesque lake dominated by a massive colonnade where couples dreamily row rented boats.  If you are in Madrid with your significant other and cannot find inspiration to show affection here, find a syringe of adrenaline and deliver it straight to your heart—you must be flat-lining. 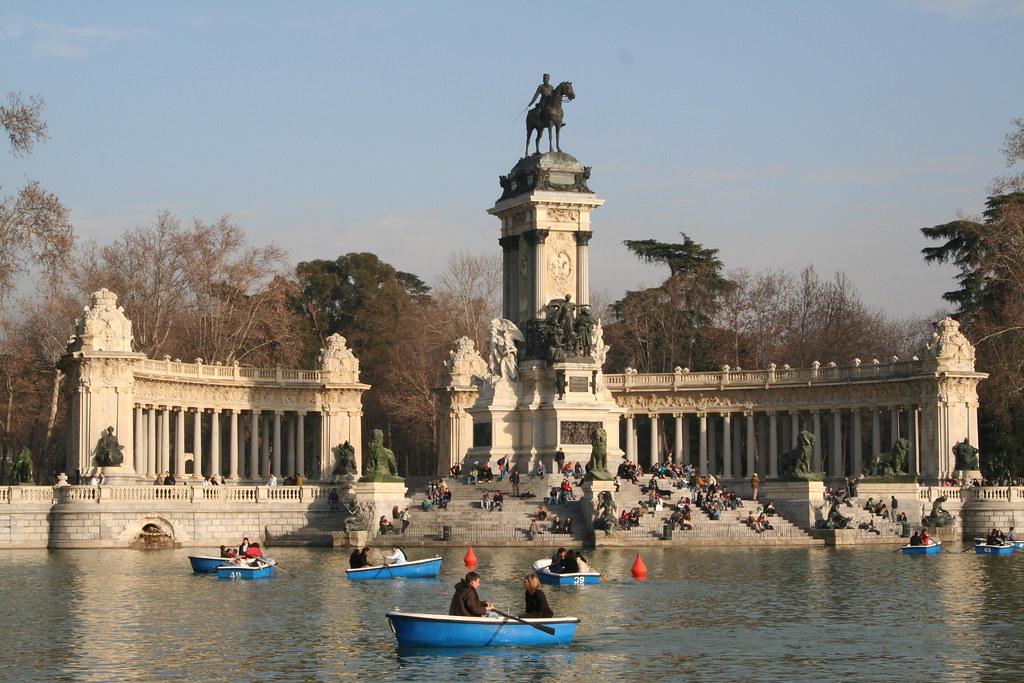 Sunday morning we rise early for El Rastro, Madrid’s most famous flea market, a sprawling ten-block bonanza with stalls lining both sides of the street as far as the eye can see on Sundays.  We buy an original etching of the inspirational colonnade from the central park and move on to the Reina Sofia museum, which houses one of the world’s greatest collections of modern art (and is free like all museums in Madrid on Sunday).  Dali, Miro and Picasso’s greatest work, La Guernica, call it home.  Stirring works like these as well as the acres of masterpieces in The Prado are as amazing a concentration of masterworks as any in the world.

Our short stay in Madrid was just right.  While not having dozens of “must-see” sights like Paris, the cadence of the city makes a more enjoyable, relaxing and natural time with a sweetheart.  Paris, while marvelous, involves exhausting sprints to absorb the city.  Madrid envelopes you.  The sites are not the attraction, simply being there, among the people and the lovers is the spectacle.  So if you are seeking a destination to spice things up a bit, do like the Madrileño; boldly take your sweetheart to Madrid, find the most public space you can and plant a big wet one on them!