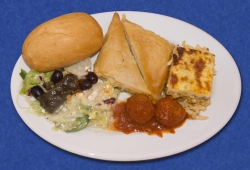 Immigrants from Greece and other countries surrounding the Mediterranean Sea began settling in New Orleans in the early 1800s. Many of these people were of the Orthodox faith and eventually established the Holy Trinity Church at 1222 North Dorgenois Street in 1864. The churched survived and grew, moving out to its current location at 1200 Robert E. Lee Boulevard and celebrating their culture with Greek Fest for the first time in the 1970s.

Greek Fest reached a milestone with the 2013 40th annual fest, but the Holy Trinity Cathedral is having a bigger milestone this year. “We’ve been here since 1864. We’re really focusing this year on the 150th anniversary of the Greek Orthodoxy in New Orleans. Our goals were to introduce the Greek culture, food, and heritage to the New Orleans community. Without the church, there wouldn’t have been a Greek Festival. It’s a celebration of being able to hold religion, a community, a culture together over all those years. We are a minority here, just a few hundred, but it doesn’t really matter sometimes about the quantity because of the quality. The members here are very committed and pride-oriented. Our youth go to the dance classes to be able to dance in Greek Fest. I’m very thankful to the whole New Orleans community that have supported us. Without their help at the festival, we wouldn’t have been able to expand and grow, and be able to give that back to the people here. That’s why we try to keep everything clean, good, and authentic. We’re very blessed,” states fest organizer and church member Ginny Zissis.

Greek Fest has maintained its popularity despite its small stature on the grounds of the church along Bayou St. John by maintaining its high quality. Food may be just one facet of the festival, but it’s a huge draw to the die-hard visitors; church members volunteer much time to be able to prepare the delicious homemade food sold at the fest that keep people coming back year after year. “We sell about 7,500 dinner plates and thousands of pastries; the dinner plate is Greek [holiday food] and a salad. We make a lot of our things homemade; we start in February making the pastries and entrees,” says Zissis. The chefs of Greek Fest go the extra mile to bring in the best makings for the dishes. That extra mile for authenticity could be thousands of miles away. Ginny Zissis continues, “A gyro is like the hamburger/hot dog of Greece; it has a good taste, and we get our customized high-grade meat mixture from Chicago. We do wonderful sales of the authentic Greek wines. We like to keep it Greek-y, if I can use that word.” One in-house cook and volunteer named Panagiotis L. Tzerefos became active with the Holy Trinity Church after he retired and keeps a detailed account of every pastry (fresh and frozen) and dinner plate sold; the numbers have increased by thousands for each of the last three years that feed the tens of thousands of fest-goers. He makes sure that the food tastes just like it does back home. “I came as a young man to America in the Greek Air Force to Keesler Air Force Base. I went to New Orleans every Sunday and met my wife. I had to go back to Greece for three years, and came back in 1954,” says Tzerefros.

When the news broke a few years ago across the nation that the Mediterranean diet could help you live longer and healthier, Greek Fest was more popular than ever; citizens sought out the festival for tips on their eating habits. The festival added more vendors and recruited some church members in the health field to teach fest-goers about the Mediterranean diet. “People that come every year love what we have, but there always looking for something new. We brought some Greek yogurt in from New York just for the fest, and it took off like crazy Our sales of olive oil [have jumped]. Our community doctors have an area where they can talk about the health benefits,” explains Zissis. However, there are some more American ingredients added to a few of the dishes in order to satisfy our long-standing tastes, such as more lettuce in the salads included with the dinner plate. “In Greece, they don’t use a lot of lettuce in salads. It’s mainly cucumbers, tomatoes, onions, peppers, feta cheese, and black olives. They don’t eat a lot of meat in the Mediterranean diet; it’s mainly vegetables, olive oil, and red wine. They’ve been drinking red wine in Greece probably since they were four years old, just a little bit with dinner,” says Zissis.

Other area restaurants have noticed an increase in business from that news as well, and have led to the opening of more Greek and Mediterranean restaurants in the metro area. One of the longest running restaurants recently moved to a new location and is owned by a church member. Mr. Gyro’s located at 3363 Severn Avenue has been operating for a quarter of a century. Not far away at 3841 Veterans Memorial Boulevard, Acropolis Cuisine is making quite a stir for gyro lovers. Byblos has been operating and opening restaurants all over the city, including one with a small market, for twenty years. “We did get more business [because of the Mediterranean diet news.] There are a few Mediterranean items that are not strictly Lebanese, but the bulk of the menu is Lebanese. One thing that people don’t know about our food is that not only is it healthy, it satisfies a lot of vegan and vegetarian people. It’s healthy; they use a lot of grains, beans, olive oil, lemon juice and fresh products,” explains Tarek Tay. The Lebanese/Mediterranean restaurant chain has done so well that the owners, Hicham Khodr and Gabriel Saliba, were able to open more restaurants under the 3 of a Kind Restaurant Group with the help of Tarek Tay.

Tay came to Byblos with the idea of expanding while keeping the great quality the restaurant was known for intact. “I liked the concept. I liked how they did things; Byblos does everything from scratch, they take great care in the recipes and the ingredients they use. So I was attracted to that and I saw a future, and maybe I could own a part of something bigger. We opened our market in 2001, and it does great lunch business. You can go have a quick lunch with a good portion. Food like Chicken Shawarma and gyros cooked fresh right in front of you,” states Tay. Byblos and the 3 of a Kind Restaurant Group are not done expanding their brand. “We are trying to focus on a fast, casual restaurant in New Orleans. We feel that we have a great product cooked fresh in house, all healthy, and we’re trying to serve it in a way where people can order a wrap, salad, or bowl and pick your toppings so it’s fast-moving healthy food,” says Tay.

Greek and Mediterranean food is available from many fine restaurants around town year round, but this Memorial Day Weekend, you can sit on the shady banks of Bayou St. John drinking imported Greek wines while listening to the sweet sounds of a live mandolin. Even if you’ve been before, there’s always something new to see, or eat like the Baklava Sundae. “I always say, ‘Come to the festival, get a bottle of wine, get something to eat, and go sit on the bayou. Enjoy the beautiful moonlit night and the music.’ How fabulous is that? I don’t think we’d have the same atmosphere if we were in a convention center. Come and be Greek for the weekend,” exclaims Ginny Zissis. Don’t forget to say “Opa!”