What is most striking about the reboot of the 1974 horror flick Black Christmas is that the themes are fully developed in the new film. Set around Christmas break at a small liberal arts college, a series of girls go missing, which starts a chain of events that leads to all out combat with a killer...or killers(?). The the plot here brings to light themes of feminism, victim blaming, and toxic masculinity, and for the most part the film works really well.

The performances throughout are stellar with an on-point performance from Imogen Poots as the resilient, damaged lead Riley. Caleb Eberhardt serves as her hapless and dorky love interest Landon. Their chemistry provides some fun awkwardness, but the women stand alone.

Another standout character is Kris, a fellow sister, played by Aleyse Shannon who serves as the de-facto social justice warrior. Riley's character, in contrast, is complicated as a victim of sexual assault. These added complexities are something not at all present in the original and make for a much stronger film. In addition, the performance of Cary Elwes as Professor Gelson is creepy, intimidating, and effective. Black Christmas shines in its moments of suspense and tension.

The scenes where the sisters are chased around their pitch black house are sequenced extremely well, playing with dark rooms as a means of creating tension, though not the first to do so. It also captures the aesthetic of a sorority house at a liberal arts college, which is rustic and run-down with pipes peeking through stucco walls, which are tinny at best.

The sisters' conflict with the killers develops well for the first hour, however as it reached the climax the film pushed into slightly absurd territory. Black Christmas relied on a conspiracy as a crutch, instead of tightening up what worked in the first half of the film, but it's a fun and dark romp for the holidays.

Quarantine Brings the Movie Theater to You

As a result of the coronavirus outbreak, Hollywood has been forced to make some changes. With theaters shut down, the deadline for digital releases has been moved up. Movies which have recently premiered (or are slated to open in the following... 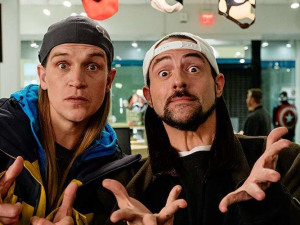 After a very limited run in theaters, Kevin Smith's Jay and Silent Bob Reboot is now streaming on Amazon Prime. This filmed-in-the-New-Orleans-area movie is for Smith diehards only. Stoners Jay and Silent Bob (Jason Mewes and Kevin Smith) learn that Hollywood plans to make a reboot of Bluntman and Chronic, the comic book whose heroes are based on them. They set off from New Jersey to Hollywood to stop the film. Along... 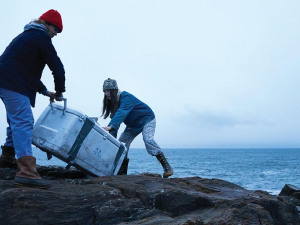 Now streaming on Amazon Prime, the new film Blow the Man Down is an effective small-town noir.
Written and directed by Danielle Krudy and Bridget Savage Cole, this film follows two sisters, rough-around-the-edges Mary Beth (Morgan Saylor) and the more grounded Priscilla (Sophie Lowe), in a small Maine fishing town. Following their mother's death, Mary Beth meets a sketchy man in a bar. After she leaves with him,...