But two years before Ike’s sonic boom, Fats Domino hit the scene in 1949 with “The Fat Man,” which historians often consider a legitimate contender for the first such song in the new rock ‘n’ roll genre. It was, in fact, the first rock song to sell a million copies—not bad for a B-side. In any regard, six decades later, the indelible mark Fats Domino left on the world is still alive and well right here in New Orleans. 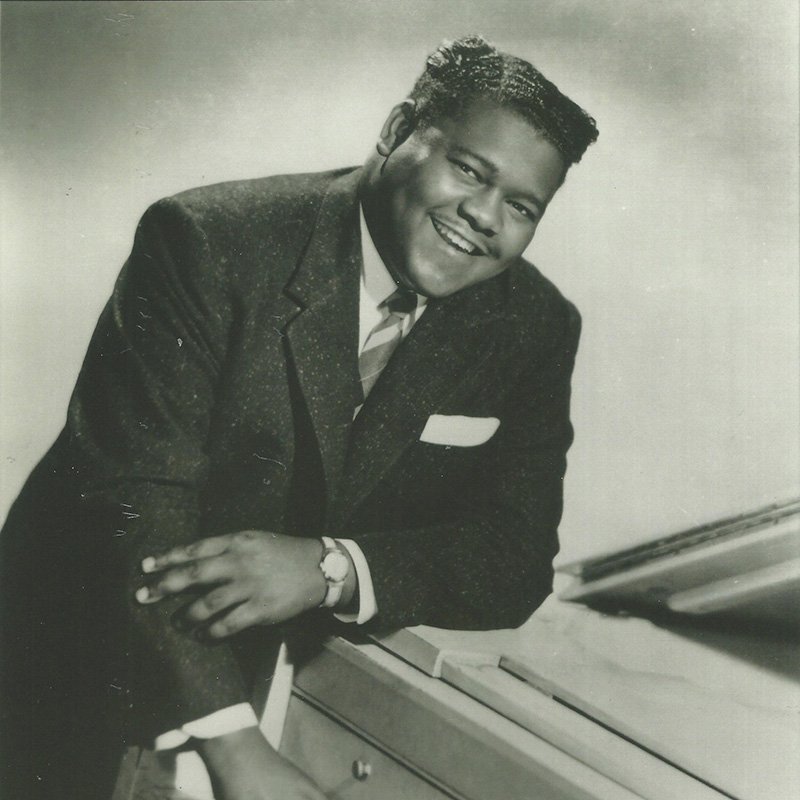 Antoine “Fats” Domino grew up in a Creole French culture that emanated from Vacherie, Louisiana, before his family settled in the 9th Ward in New Orleans. New Orleans bandleader Billy Diamond was the first to recognize young Antoine’s talents and gave him the nickname Fats because his boogie woogie piano style reminded him of stride legend Fats Waller and local pianist Fats Pichon. Pichon’s big band orchestra was considered one of the best in New Orleans (although, unfortunately, they never recorded).

In any case, a certain Dave Bartholomew emerged from that band and would have a tremendous and lifelong impact on Fats Domino’s career. Dave Bartholomew packed Fats’s band with a powerhouse of talent including saxophonists Herb Hardesty, Alvin “Red” Tyler, Lee Allen, bassist Frank Fields, and, in particular, two drummers who laid the foundation of rock ’n’ roll with Fats and many others: Smokey Johnson and Earl Palmer. Fats and Dave would go on to spend the rest of their careers together producing some of the most popular songs of the 20th century. This was mainly in the mid-50s and early 60s on the Imperial label and included “Blueberry Hill,” “Ain’t That A Shame,” “I’m Walkin’,” and “Blue Monday.”

Always one who enjoyed his privacy, Fats Domino most recently performed at Jazz Fest in 2001. After cancelling his 2006 Jazz Fest show due to illness, Fats played for the last time 10 years ago at Tipitina’s to coincide with a PBS documentary. Fats’s final public appearance was at the New Orleans Arena for his 2009 tribute concert, which featured performances by Chuck Berry, BB King, and Little Richard. New Orleans sadly may have seen and heard the last of its most significant living musician, who is now 89.

Several local musicians have shared what Fats means to them:

"Fats Domino was a big influence for many people. My brother Art was his biggest fan. Also, Ricky Nelson and Pat Boone were big fans of Fats. I do a tribute to Fats on my duo shows. He was a pioneer of rock ’n’ roll, rhythm & blues, and American music. Fats Domino helped to form the New Orleans sound, the New Orleans beat. He had a unique piano style and a unique voice—the way he used to bend the notes when he sang."

"I got to know Fats about seven or eight years ago through my friend Haydee Ellis. I would go over to Fats's gated-community house on the Westbank with Haydee and was able to bring several friends over several visits, which was always a thrill. He was always in a good mood, though beginning to be forgetful.

Even better than these visits was Fats's trip with Haydee and her husband to my gig at Houston's one night. He came in a nice jacket and his skipper's hat, and the young women servers were SQUEALING with delight at his presence, like he was Kanye. I sat down with the three of them and listened as Fats answered every comment by singing. Haydee: 'Gosh, it took us so long to park.' Fats: 'Ain't That a Shame...' Stuff like that. It was great."

How has Fats Domino influenced/inspired you personally as a pianist/singer/entertainer?

"I first saw Fats in a black and white film on the TV when I was about six or seven years old and called my mum in to see. She said, 'Yes darling, that’s Fats Domino from New Orleans.' I think that’s when the first bell went off. The lesson I learned from Fats that moment is that if you’re having fun on stage, doing it right, the audience is taken care of. And it doesn’t have to be fancy to get you there."

What do you think are Fats’s most enduring and endearing qualities?

"His was simply the sound of music that makes you feel good. Music for everyone and that smile that just stole your heart. The Fats Domino Orchestra with Dave Bartholomew and Cos established a simple formula that sounds as good today as it did in the early 50s. There have been no improvements in technology in all that time that would have made those records any better than they are."

Do you have any personal stories regarding Fats Domino?

"In recent years, I’ve been lucky enough to go over to his house on occasion, play piano, eat Popeye’s chicken, and hang out with him a bit. His eyes light up at the sound of an old boogie or junkers blues, and before long, he’s leaning on the piano. Then, after a few minutes, I’ll scoot over and he’ll sit down next to me and then it’s a matter of seconds before he reaches over and starts tickling the upper octaves, and he sounds great. Music is medicine, and for him, it’s just what the doctor ordered." 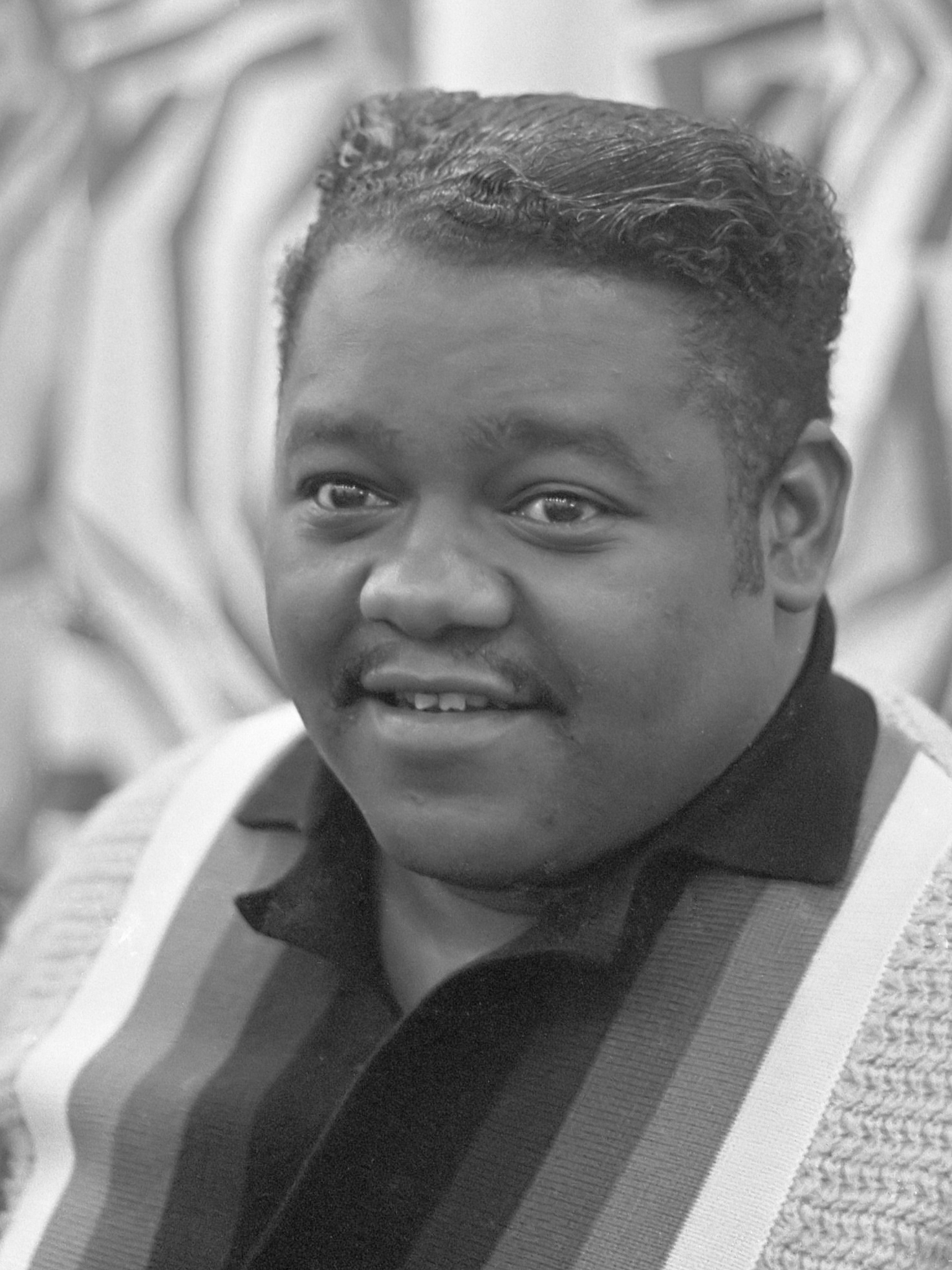 How has Fats Domino influenced/inspired you personally?

What makes Fats so special to you?

"Clearly, Fats’s strongest quality is his voice and his singing. He has a very smooth style that charms the listeners. He is truly a great piano player, but his singing is what puts him over the top. His voice and the songs he and Dave Bartholomew put out bridged the New Orleans sound into mainstream pop music. Rolling Stone ranked “Blueberry Hill” #82 in their list of the 500 Greatest Songs of All Time.

Have you ever spent time with the Fat Man himself?

"Back in 2011, on the Saturday before Mardi Gras, I got a call. This person asked me if I would be interested in playing some boogie woogie for Fats Domino. I kind of thought it was a joke, but apparently, Fats was celebrating his birthday and he wanted to hear some boogie woogie. They wanted to know if I’d be interested in coming to the party to play some boogie woogie piano for Fats. I was going to watch Endymion at a friend’s house that day, but I thought this was a once-in-a-lifetime chance, so I blew off the parade and went to Fats’s party to play piano for him. I went to his daughter’s house on the Westbank and there was a small party of about 40-50 people going on there. He sat on the couch [made out of the trunk of an early 60s Cadillac—see photo below], and I played boogie woogie piano and talked to Fats for about an hour. It was very spiritual for me, hanging with Fats, playing piano for him, surrounded by all of the memorabilia and gold records all over the wall. He was totally cool the whole time. It was truly a once-in-a-lifetime event for me." 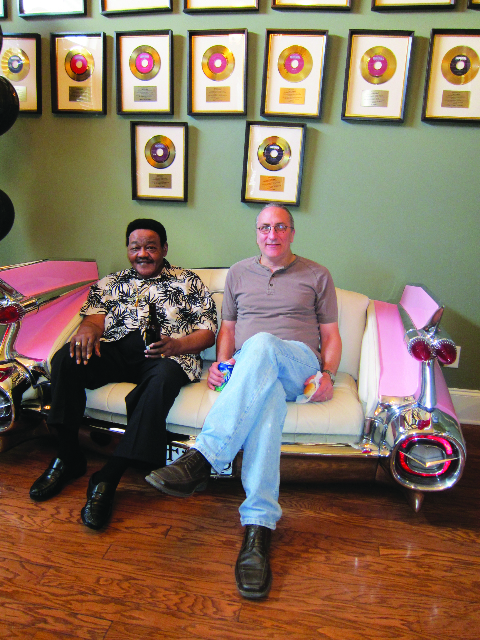 "Fats Domino is the center of the universe and, as such, has influenced almost every decision I've ever made since I can remember. As for his most enduring quality? (His vurse, of curse!) My favorite personal story having to do with Fats? We both used to shop by the A&C across the canal and would run into each other there. I gave him a recording of me and the Special Men playing his songs. But to be honest, witnessing his live show and watching him bump a grand piano across the stage with his belly had an even greater impact than being in his presence at the corner store or bar."

Finally, Fats Domino's family had this to say about Fats himself: "Although Fats has retired from performing and making public appearances, he stays active and interested in all things New Orleans, the city that he loves. He has been listening to music, particularly that of Nat King Cole, and spending time with his family. Fats also enjoys the food from his favorite local eateries.

Just before his 89th birthday, Fats launched his first-ever website (FatsDominoOfficial.com), established his presence on social media, and opened the doors to his first official online store. He enjoys reading the messages and emails he gets from fans all over the world and always appreciates their kind words."

Want more Fats? Come to the first-ever screening of Jazz Fest Legends: From Fess to Fats, presented by Ponderosa Stomp and Ace Hotel. The film, a compilation of clips compiled by Joe Lauro (aka Video Joe), will be showing at Ace Hotel on Wednesday, May 3, at 2 p.m. For more information, go to acehotel.com. 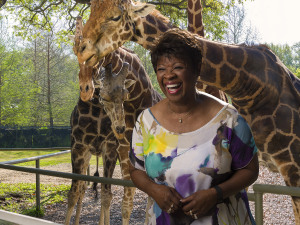 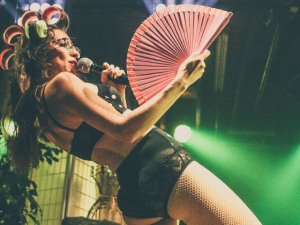