Dawn of the NOLA Zombie Craze 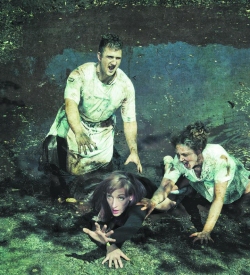 It seems that zombies are now taking over the Earth. Not real zombies, of course, but the fans of the technically-deceased cannibals. From fantastical television shows and video games, to pub crawls and fun runs, zombies are well-represented outside of their long-time horror film home. The invasion has even spread down to New Orleans, the city that has always been well connected to the dead, and is exhibiting symptoms of growing bigger.


The first organized group of zombie-lovers was formed by Lisa Gardner. Gardner simply joined a group of people advertising their zombie-themed bar crawl, then began the official NOLA Zombie Pub Crawl the next year.  “When I started this, I was the only zombie chick on the block. Now there’s zombie people everywhere. My group wasn’t the first walk, but I was the first to organize it on Facebook.,” says Gardner. “In 2010, my fiancé had made me aware of a posting on Craigslist that they were going to do a Lundi Gras Zombie Walk. I immediately contacted the lady and asked if I could help out, and she said yes,” explains Gardner.


The organizer brought the zombie infection from the West. Around the country and Canada, zombie walks can draw thousands of participants. “She had attended a walk in California, but had not really done much other than post on Craigslist about her walk. I made a Facebook page, and it was probably about thirty of us. After that, she went away. I never spoke to her again. I just decided to do it on my own. We had one in May 2011; it was our first annual. We chose May because it was after Jazz Fest, and it’s National Zombie Awareness Month. The first one had a really nice turnout. During the second one in 2012, a band just showed up and we’ve adopted them as our zombie band now called NOZOM Jazz Band. We’re small here compared to other cities, but none of them have their own zombie brass band,” explains Gardner.


After their third annual walk this past spring, NOLA Zombie Walk plans to continue with it, and possibly add some unconventional zombie parties. “I decided to just do the annual walk because I started getting calls from people who wanted zombies at whatever they did. I found here that the zombies gather better if alcohol is involved. I was contacted by people that promote movies down here, so I had to do them. I did do a small an Ugly Christmas Sweater Gathering of the Horde Karaoke Night; it was so much fun and I want to do it again. I want to keep mine free, and drunk, and I like the feeling that it’s randomly in May. People ask me why I don’t do them in the French Quarter anymore. Because everybody blends in the French Quarter. But on Magazine Street…We’re there to stay, and next year, if it’s me and three friends, we’ll have a good time,” says Gardner.


The next new krewe on the block was made by Richard Riggs and Michael Gadonneix when they realized that there was a complete lack of zombie representation at the annual Wizard World Comic Con; a large national comic convention that includes horror culture. They came back the next year with a mission to spread the word about getting an undead horde together to march during Mardi Gras. “We did our first walk during Mardi Gras in February 2012,” says Richard Riggs about the Krewe of the Living Dead’s first march through Uptown. They took their fandom to the next level by joining in the Intergalactic Krewe of Chewbaccus, and they often host many walks throughout the year from the French Quarter to St. Charles Avenue. Their walks are always free and open to the public. You can keep up with their activities on their Facebook group Krewe of the Living Dead Social-Aid and Pleasure Club.


The zombie craze quickly ran, or limped on broken legs, its way past the true nerds and fans to the realm of the mainstream where it was noticed by Jon Renaudin and Graham Bosworth who founded NOLA Zombi; a group that utilizes America’s new found zombie vogue to raise money for life-saving local animal shelters. “Renaudin had the idea…he was a really big fan of the work of the SPCA and controlling the local animal population and he wanted to throw some additional funding their way so they could continue their mission of making a shelter and allowing them to take in more animals who wouldn’t normally find shelter elsewhere. He was a huge fan of the AMC show The Walking Dead, and noticed that a lot of other people were too. Piggy-backing on the zombie craze around New Orleans, and picking up speed around the country, he came up with the idea to have a zombie organization and event production company to house various events with the proceeds benefitting the SPCA of Jefferson and Orleans,” explains Creative Director of NOLA Zombi Adam Mitchell.


NOLA Zombi has had successful walks since forming one year ago that have raised a substantial amount of money for the Jefferson SPCA, but the most anticipated event was their Z-Day 5K and Festival on September 21st. “We are expecting a big chunk of change to fall their way from that event. We personally ran a few other zombie runs across the nation, and they lack things that are really challenging. We went back to the drawing board to up the ante on what you would normally find at a charity 5K. We enlisted the help of a few military brains to get the course up to military standards. I’m behind helping to plan this thing, and I’m starting to panic because I don’t think I’ve trained enough,” says Mitchell.


People love looking like they’ve been dead and rotting for some time and acting as though they want to eat the living, like the slow-moving monsters we’ve watched for decades in movies with disgust and fear. Why is that so appealing? “I actually read an article that when the economy is down, people look for things outside themselves to bring them up. The entire idea behind zombies: something dark, something mysterious, maybe not the most uplifting, and it goes hand-in-hand with what the economy has been going through since 2008. I think that’s part of it. And there’s been these talented minds bringing the whole concept of zombies as we know it and expanding it into franchises, TV shows, and video games. My personal view is that are zombies are actually becoming almost a permanent fixture in popular culture,” explains Adam Mitchell. He continues, “My favorite zombie movie would have to be 28 Weeks Later. I thought they really did it in with the doom and gloom.”


Lisa Gardner got an answer to that question from her son. “It certainly has gone mainstream, even before The Walking Dead. My son told me it has to do with video games, the Resident Evil movie and game coming out, and some other good movies. [Nerds] are pretty hard critics. Unlike most zombie-lovers, I do enjoy the fast-moving zombie. But you can’t have fast and slow in the same movie, missing or severed or broken limbs aside. They’re not technically zombies, but I do love 28 Days Later because they’re infected. And, of course, the standard Shaun of the Dead. When she throws that dart and it hits him in the head, I laugh. I try and watch foreign zombie movies so I feel like I’ve seen everything done,” says Gardner. Richard Riggs still enjoys the classic progenitors of the zombie film sub-genre made by the zombie master George Romero. “My favorite zombie movies are Night of the Living Dead and the original Dawn of the Dead. I like both for different reasons,” states Riggs.


Zombie lovers from Romero’s earliest fans to recent viewers of AMC’s The Walking Dead, can all join in the bloody fun. It may just unleash the monster in you.

Warning: count(): Parameter must be an array or an object that implements Countable in /home/webapps/enterprise-web-root/aws-sites/sites/whereyatcom/exceptions/body/layouts/article.php on line 104