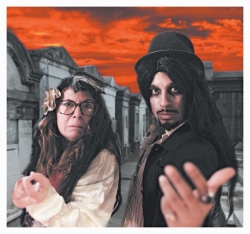 From the awkward crew of writers featured on 30 Rock to the lonely cast of Louie, comics of late have put forward a recurring theme of isolation and insularity about their own industry. The self-deprecating comic repeating jokes to a room of struggling peers has become it’s own stereotype, perpetuated by comedians themselves. I imagine the comedy scene of any town to be insular, dark and unwelcoming to outsiders. Who wants to sit through a bad joke after all? If someone misses a note in a concert you’re still hearing music, but a missed joke is something far worse. It’s a vulnerable, awkward, potentially offensive moment, a moment I try to avoid at all costs. Bad comedy is, after all, its own comedic trope.

So, as an admitted improv & stand-up skeptic, I chose to research the local scene, which has exploded to something far louder the cricket-chirping open mic cliché.

With eyes ready-to-roll and scoffs up my sleeve, I entered one of the most popular open mics in town: Wednesday nights at Carrolton Station. I arrived right on time but there were no stage-facing seats to be found. I took the liberty of moving chairs from the restaurant section of the bar to a dark “don’t mind me” corner of the room when twenty people entered from a courtyard and promptly let me know I was blocking the side entrance to the stage. Turns out the crowd of people already seated were not there to perform, like I’d figured, but there to watch. One assumption already debunked without a punch-line so much as punched!

The night had a natural rhythm of ups and downs, but the median was a bar much higher than I had imagined. I never felt the collective cringe, never faked a pity chuckle or felt guilty for being more of a “smile and nod” kind of girl than a LOLer. As citizen after citizen took the mic, the crowd around me grew. I realized that much like the live music scene in New Orleans, I was participating in a community event, one central to the culture of that particular bar. But at the rate things are going now, I’m convinced live comedy will soon be central the culture of the city at large.

“We want New Orleans to be a serious destination for comedy, for the scene to be dynamic enough that people can approach it the same way as live music, thinking ‘Which show should we go see tonight?’”

I spoke with Chris Trew, one of the founding members of the New Movement Theater, the nucleus and an undeniable force propelling the scene forward. And he’s right - with about twenty improv shows and thirty stand-up options a week, there’s no lack of choices for a comedic night out.

Chris makes an insightful point. Not only is the scene vibrant with it’s own following – people who aren’t comics, but true fans – what’s happening in New Orleans is resonating with the comic nation. Comedians that once would’ve skipped out town now make us a stop on their national tour. Being the Hollywood of the South only propels this notion forward – comics in town for filming now make regular appearances at local shows, keeping the scene unpredictable and nationally relevant.

While breeding a local audience for comedy (in a city known for loud, drunk nights out), The New Movement is also propagating the comedic community itself with their commitment to quantity and quality. They’ve published books, host continuous training courses and improv intensives and insist that anyone graduating from their school of comedy has constant recurring stage time.  (Completing their full five-level program is a solid year of comedic coursework).

“Trust us.” Says Trew. “Everything we put on stage comes from our training center.” He said their venue in the Marigny is like a theater attached to any music or art school. They only present students who are committed to their comedic standards. And they’ve outgrown this space, moving soon to a larger, “swanky new pad” on St. Charles.

While New Movement breeds a comedic audience and army, taking New Orleans night life to a new level, Sunken City is sprawling across the web. I spoke with Kyle June Williams and CJ Hunt, founders and lead actors of the popular web series set in NOLA. The show, which follows a handful of recurring characters through a season of satirical sketches, has an undeniable Portlandia feel. When asked how they respond to this comparison, Hunt said it’s only an honor “Like being a basketball player compared to LeBron James… just shorter.”

“I really feel that we made a feature film,” Williams said of their debut season.  “We want people to see themselves in the characters, to relate to their struggles.”

Indeed one notable distinction between the Portlandia and Sunken City is the consistent narrative thread. It’s satire, yes, but these people are also loveable, pitiable and relatable. Motivating the Warlock tour guide trope is the very relevant question for a tourist economy: What do tourists really want? How much voodoo and magic do we sell, verses being transparent and real? And behind the rich uptown couple seeking Mardi Gras royalty: What is it like to feel truly defined by the krewe you belong to? To be trapped by your status? While both shows treat the city itself as a character, New Orleans is given a mystic treatment. The characters, while exaggerated, bring up real questions of what it means to live here.

“People may want to date Portland, but we hope they want to marry New Orleans.” Williams hopes the show will serve as a spotlight on the city and its pool of comedic talent – not a tool for controversy or social commentary… except for the whole glass recycling thing… ”I mean how can we not recycle glass?!”

I couldn’t help but wonder if the characters parodied on the show are drawn from real-life relationships and frustrations. But the creators insist that the show is more about giving New Orleans it’s own great comedy. We have American Horror Story and feature films using New Orleans as a backdrop... now here is our comedy, where the city is the both punch line and hero. National audiences have had Katrina and Treme as their main reference point for the city. It’s great to now add this quirky series to the canon of NOLA-centric media.

With episodes airing every Monday night, Sunken City has gathered a strong audience of regulars. And of course the magic of the Internet means that this show can resonate nationally, acting as a prolific ambassador for the local comedy scene. In the meantime, they hope to take bring the show to life by creating a whole culture around it. They’re currently submitting the season to film festivals and planning podcasts and live events, keeping in mind that NOLA really is an event-oriented culture. Upcoming seasons will feature new tropes and stereotypes, stay tuned at oursunkencity.com.

The comedy scene had grown to be a force with it’s own inertia. Now is a great time to catch some events and feel the energy of a scene on the rise. New Movement’s Saturday series “Megaphone” hosts local celebrities recounting true stories followed by improv inspired by those stories. Thursdays are the Lights Up show, a showcase of developing troupes, and the ever-growing Hell Yeah Fest is set for November. Learn more at newmovementtheater.com.

Of course, LaNuit Comedy Theater, the “original home of NOLA comedy” recently hosted the very successful New Orleans Comedy Arts Festival and continues to be one of the most popular resources in town. Their master classes and courses in writing are an established asset to the local comedian. Their all-ages ComedySportz event on Friday and Saturday has a “brown bag foul” rule in place (putting a brown paper bag over the offending performer’s head) to keep things within the “boundaries of good taste.” Check their regular events schedule at lanuittheater.com.