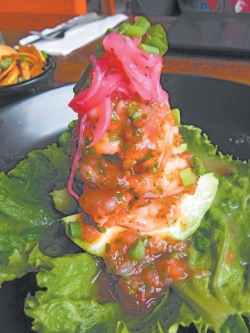 When the weather heats up and the days get longer, all I can think about is relaxing outside with a pitcher of sangria, crisp tortilla chips and a heap of heavenly ceviche. Ceviche, in all of its forms, seems somehow representative of tropical vacations and warm ocean breezes with its delicate preparation of fresh, local seafood, bright, tangy citrus and lush avocado. Although there seems to be a dearth of good Mexican restaurants in the Crescent City, there's an abundance of options where one can celebrate Cinco de Mayo affordably, and in style, with an enticing ceviche.

Just opened a couple of years ago on the corner of Carondolet and Clio, Mais Arepas is a casual Colombian restaurant that features arepas or grilled cornmeal cakes, a staple of South American cuisine. This Central City restaurant is already famous for its split arepas stuffed with items like grilled chorizo, queso fresco, and slow-cooked beef, and their fresh, house made juices, but they also offer a mouthwatering ceviche. Share it round as an appetizer or wolf it down all to yourself, either way you'll enjoy their Ceviche de Camaron Valluno with fresh, Gulf shrimp, lime juice, chopped tomatoes and red onion and cilantro served atop thick wedges of avocado. It's an added treat to scoop up every last morsel with the crisp plantain chips served alongside.

Down in Bywater, you can get your ceviche fix at Booty's Street Food, a gastro-pub of sorts on the corner of Louisa Street that offers delicious cocktails and tapas-style plates showcasing an array of international street food. Alongside items like tacos from Tijuana, Mexico and fish &chips from Oldham, England, you'll find ceviche from places like Colombia to Peru. Several months ago, Booty's offered a Ceviche de Coco made with locally-caught puppy drum, lime, onion, habanero, cilantro and (my favorite part) coconut milk, but since they have altered the menu to offer a Ceviche Peruano with the same kind of fish, but instead served with choclo (Peruvian corn), sweet potato and aji amarillo (peppadew). Either way, they both are delicioso to me...

On the corner of St. Charles Avenue and Girod Street, award-winning chef Donald Link and his chef de cuisine Rebecca Wilcomb at Herbsaint are always surprising diners with unique dishes that always seem to fit right in on their eclectic, American bistro menu. Alongside grilled hanger steak and poached chicken, you'll find Crispy Goat with curried lentils or Gnocchi with lamb bolognese. But we're talking ceviche and Herbsaint has lately offered a colorful Louisiana Shrimp & Fish Ceviche featuring chunks of Gulf shrimp, bright red tuna and whatever local fish might be fresh that day from speckled trout to flounder. The seafood is then marinated in lime juice, chopped tomatoes, cucumbers and pepitas (pumpkin seeds) and served in a glazed-clay dish.

One of the largest ceviches I've ever encountered thus far, a portion that could easily feed one person quite well for lunch, can be found at La Macarena Pupuseria & Latin Cafe on Hampson Street in the Riverbend. Known for their incredible pupusa's (a.k.a. Arepas) stuffed with queso, shrimp or pork with a side of some of the tastiest black beans in town, La Macarena offers hearty, Latin American dishes that won't strain your wallet, including a massive ceviche.  Served in a huge dessert dish with toasted , buttered rounds of French bread, their Ceviche de Camarones Salvadoreño is loaded with chunks of Gulf shrimp, chopped tomato and fresh cilantro, a serving that is both light (calorie-wise) and filling. Because the ceviche is chock full of fresh Gulf seafood and tomatoes, you can still treat yourself to a slice of their moist Tres Leches Cake without feeling too guilty afterward.

Finally, yet another spot to score ceviche can be found over in Mid-City at Santa Fe Restaurant. Most of the tables are located outside where diners can feast “al fresco” while watching the traffic cruise by on Esplanade Avenue. Sip fresh fruit margaritas and munch on complimentary tortilla chips and salsa while perusing a menu filled with Tex-Mex offerings like beef empanadas, pulled pork tamales and chicken enchiladas. A house specialty, their Santa Fe Ceviche features fresh, local fish like Louisiana drum is marinated with jumbo shrimp, calamari, bell peppers, cilantro, red onions, radish, tomato, thick slices of avocado and assorted greens in olive oil and fresh citrus juices like lemon and lime. After scarfing their ceviche with a couple of margaritas or a decanter of sangria, you won't be ready for anything other than a siesta till supper time.