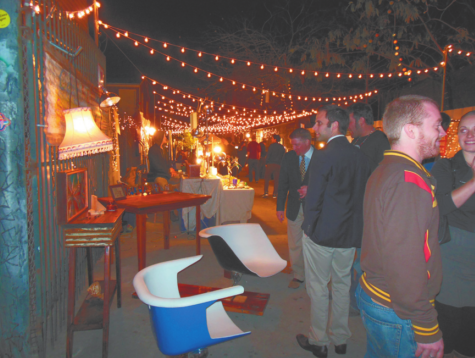 Nestled in the lot beside The Spotted Cat under suspended strands of soft white lights, the Frenchmen Street Art Market is teeming with a diverse array of handmade goods and the people who crafted them. The addition of an art market to a street known for its bars, restaurants and live music brings with it the introduction of a new evening activity: admiring treasures.

From 8pm until 1am each Thursday through Sunday, the space is bustling with shoppers, collectors and casual browsers, from locals to tourists alike. The seemingly endless cast of artists rotates each week, as space can be rented by the night so as to accommodate transient vendors and provide artists with ample time to assemble new items. Repurposed clothing, organic soaps, leather accessories, old-fashioned hats can all be found among the market’s vast assortment of goods and features, along with custom body paint services, a documentary fi lm, kitchenware made of melted glass bottles, iconic photographs, paintings, drawings, prints, sculptures, scarves, and jewelry of many styles.

Since its recent establishment this past August, the art market has integrated itself into the Marigny and become a Frenchmen Street fi xture with ease. This seems to be largely the result of careful planning and emotional investment on the part of its directors, Kate Gaar and Jon Dyer, who meticulously directed the market’s structure and aesthetic.

The lot is complete with an expertly orchestrated ambience that only an artist could have invented. From the lighting scheme Gaar designed and installed to the decorations and furniture she collected, the space has a draw that is both timeless and unexpected.

A fast food sign leads the way by pointed arrow to the booths toward the back of the market. Delicate fi xtures illuminate every station. Lounge areas are sprinkled throughout the empty spaces, with light-up periwinkle chairs and claw-foot bathtubs that have been revamped to form chic couches.

In keeping with the atmosphere’s general luminescence, the letters A.R.T. stand together as a sculpture studded with lit bulbs. Kate was proactive in designing the market down to its last detail. When she failed to fi nd the right “R” to situate between the “A” and “T” she’d gathered, she merged two metal “P”s to form the missing letter. “I’m not in the business of hiring people to do things for me. I’ve always liked being the one to build…that’s one of the reasons this project was so exciting to me in the fi rst place,” she explains.

It all started last year when a friend suggested the idea of an evening fl ea market. Kate decided to run with it: she installed a pop-up art mart outside of Blue Nile during festivals, and was met with great success. When other participants urged Kate to extend the project into the summer months, she obliged enthusiastically.

After securing a month-to-month lease on the lot, however, Gaar was confronted by several unanticipated complications in the realm of bureaucracy. She was told that due to the open-air nature of the market, City Hall’s zoning committee would require her to purchase a “Special Events Permit” at a whopping $1,000 every ten days.

But community support for the market’s permanence was powerful, and within weeks, City Council had made its fi rst unanimous decision to change a zoning law, a shift that waived the necessity of these exorbitant fees. Successful petitioning additionally affected a change in the lease of the lot from a monthly to a yearly contract. At last, it appears as though the bazaar is here to stay. 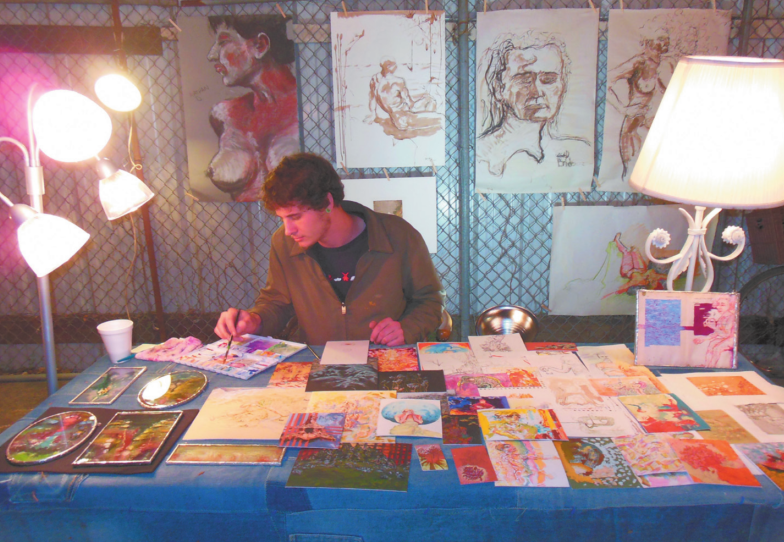 “It was a big gamble,” Kate says of the earliest days of the market, “an uphill battle.” Yet as an artist herself, she was determined to establish the market regardless. She was born into a family of artists. Her great-uncle Mike Frolich painted the elaborate murals that cover the Saturn Bar’s interior. Her grandfather was a furniture maker; another uncle, a photographer. The rest of Gaar’s family was more conventional, consisting of lawyers who insisted that to make a living as an artist is nearly impossible.

Against these odds, Kate supported herself for thirteen years by making jewelry and selling it in boutiques. Unfortunately, however, the circumstance was unrewarding. “You never know what selling your soul is ‘til it’s gone,” she begins with a laugh. “When the recession hit in 2005 and the bottom fell out, I was ready to move on anyways. I was so sick of designing things according to what was in demand, I had stopped making things that I liked.”

Kate wanted to fi nd a way to tap into the potential demand for the things that artists really want to be making: a means of providing them with the opportunity to transform their talents into livelihood without having to compromise their creations.

In some ways, the market has already proven successful in this aspect by bridging the gap between little-known artists and admirers who buy and collect. According to one regular to the market, Nurhan Gokturk, the process of selling art is a lot more appealing in this type of environment. “Yeah, the price of renting a booth at the French Market is lower, but I’m happy to pay the extra just to be here,” he says. “There, you’re going to be bombarded with tourists looking for souvenirs, bargaining for the best deal. They’ll be comparing your art to mass-produced jewelry, alligator heads or plastic sunglasses, and looking for the ‘best deal’. I’d even be willing to pay more just to be able to sell in a market full of people who are actually interested in art. People who are looking for something that speaks to them and are appreciative when they fi nd it. It makes the transaction easier, enjoyable, even,” he adds.

With a market that caters exclusively to art and its makers, Gaar hopes to alleviate the tedium of the monetary side of things for all of her vendors. “Most artists aren’t business people,” she admits. “I want them to do well, so I try to train them in techniques of pricing and presentation so that they can have an opportunity to make a living off of the things they create…We charge $60 per night for a booth, so some of the artists who are used to selling on the street ask, ‘Why pay a fee?’ Well…this incredible art [is] on the ground with all these drunk[s] walking over it, plus, you can’t sell art in the dark. So I suggest that they try selling at the market for free and see how they feel. Usually, they end up doing really well and asking to come back.”

Ben Gregory, for instance, airbrushes brightly colored images of striking, misshapen creatures wrought with expressions of intense emotion. For years, he has been setting up shop on the neighborhood’s sidewalks. Once he began selling at the market, he encouraged fellow artists to join him in this new setting, in which their images are presented on illuminated tables.

Kate hopes that the polished presentation of the art being sold at her market will provide featured vendors with new opportunities for growth and exposure. “I don’t want my artists to be there forever. I want them to move on to bigger and better things!” she exclaims.

The market’s organizers are hoping for their own expansion as well. For Gaar, it is just the fi rst step in a bigger plan to “connect the dots” between the St. Louis Cathedral and St. Claude Avenue. To her, it is a potential arts district: a place in which fi ne artists liven the area with their creations, and are met with ample appreciation for their work.

As far as its future is concerned, “I plan for the market to become one of the top ten things to see in New Orleans,” Kate says. “I plan on it being there forever.” 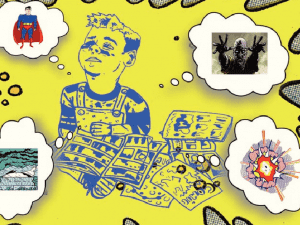 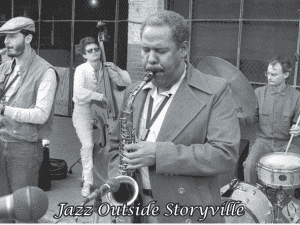