There’s nothing like listening to a chef rattle off a string of demands in his own special dialect.  As in, “Pick up 31.  I got three soups all day, and 86 the rice.  I need a biscuit in the window for that 10-top on 40 right away to get us out of the weeds.  Send out three lagniappes to the XXP’s on 53.  The front just got triple sat and this eggs benny over here is dying.”

Make sense?  Probably not.  Because working in the service industry comes with its own lingo.  Words like 86, working a double, or sidework, for instance, are easily decipherable.  But we also regularly use terminology that would require a translator for the average non-service-biz joe.  Like “clopin”.  That’s short for close-open.  It’s what we call it when you work till the wee hours closing the restaurant, and have to be back in a few hours to open up again (which happens painfully often).

One of the biggest things in our special language is to communicate every possible movement we make with each step.  We constantly broadcast our precise location, with more accuracy than a GPS.  With all that helter-skelter, chaotic walking around the kitchen and dining rooms, the staff has to use verbal turn indicators to avoid any unnecessary accidents or potential collisions.  You put on your blinker by shouting out location descriptors in order to announce your exact whereabouts at all times.  Especially in proximity of another person.  Therefore, any restaurant echoes with constant cries of, “Behind you!”, “On your back!”, “On your front!”, or “Corner!”, when rounding a corner.  I feel like a garbage truck-- like I’d beep if I backed up.  These continual announcements are, of course, so a server with a hot coffee pot doesn’t run into someone else carrying a tray full of bloody mary’s or plates piled with slippery eggs benedict… as to avoid scalding injuries, unneeded mess, or slipping on a slick of hollandaise.

Yet even with more positioning reports than a game of Marco Polo, bumps and spills still happen.  So sometimes I feel I really need to spell it out:  “On your right side on a slight diagonal, specifically, an approximate 45 degree angle off your right heel and slowly approaching the proximity of your right hip, and could potentially be in the direct path of your coffee pot-wielding right arm if said arm is raised within the next 30 seconds.”

Among all the slang we use in the service industry, there is one thing-- quite common where I work-- which you never want to hear any chef in the kitchen say:

This means he needs hands, as in yours, for carrying plates of food to the tables.  Get it while it’s hot.  Drop what you’re doing, no matter what you’re doing, and come running.  Code blue.  Never mind that you have 15 people waiting for ice water, five tables that need bread, four cappuccinos to make, and a lady who asked you three times for more cream.  Hot food is supposed to be priority number one, and trumps all other obligations you might need to tend to.  It’s a stressful interruption, and when you’re busy, one which can really slow down your groove.

I naturally pictured some sort of Edward-Scissorhands scenario with a chef whose fingers are fused into bananas at the tips.

But there’s no avoiding it.  The chefs are nothing if not persistent.  I’ve had one tell me, as I was getting ice water for a table:  “That can wait!  Hot food is more important than water!“  (Try telling that to a man when he’s on fire).  And another time after repeated calls for hands, which I ignored in favor of some other pressing task, he snapped at me, “Do you think I’m not talking to you?!”  It’s gotten to the point where going in the kitchen at all scares me, and it seems safer to simply stay out of there altogether.  Except that that isn’t going to get those cappuccinos made either.  Besides, some chefs, when left “handless” with a bunch of plates on the line needing to be run to tables, will dare venture out of the kitchen to forcefully recruit some poor, unsuspecting (and otherwise-occupied) server:  “I need hands, please!”  There’s even one cook who is retired military.  He knows how to motivate the ranks, since we are all far too frightened to mess with an ex-marine on a rampage for hands.

Many chefs are notorious for being short-tempered and egotistical.  The ones I work with happen to be pretty cool, actually, but no matter.  Because there is no insult or abuse any one of them could throw at me that is any worse than those dreaded cries I hear at least 857 times per shift: “Hands, please!”

It keeps me up at night.  I hear that phrase in my sleep.  I have nightmares that my hands fall off and my arms end in bloody stumps and I wake up screaming:  “I need hands!”

It’s not just hot food that needs immediate attention, however.  This infamous call to hands goes even further.  The pastry chefs ask for “dessert hands” when a dessert is ready to be taken out of the kitchen to an awaiting guest in the dining room.  If it’s someone’s birthday, they get a complimentary dessert, with Happy Birthday written in melted chocolate letters decorating the plate.  And sure enough, when it’s time to deliver that birthday special to the table, they start asking for “birthday hands”.  Most importantly, however, when a certain banana-centric dessert has been prepped and needs to be removed from the kitchen, flambéed and served, the pastry guys anxiously call out, “Can I get banana hands, please?” 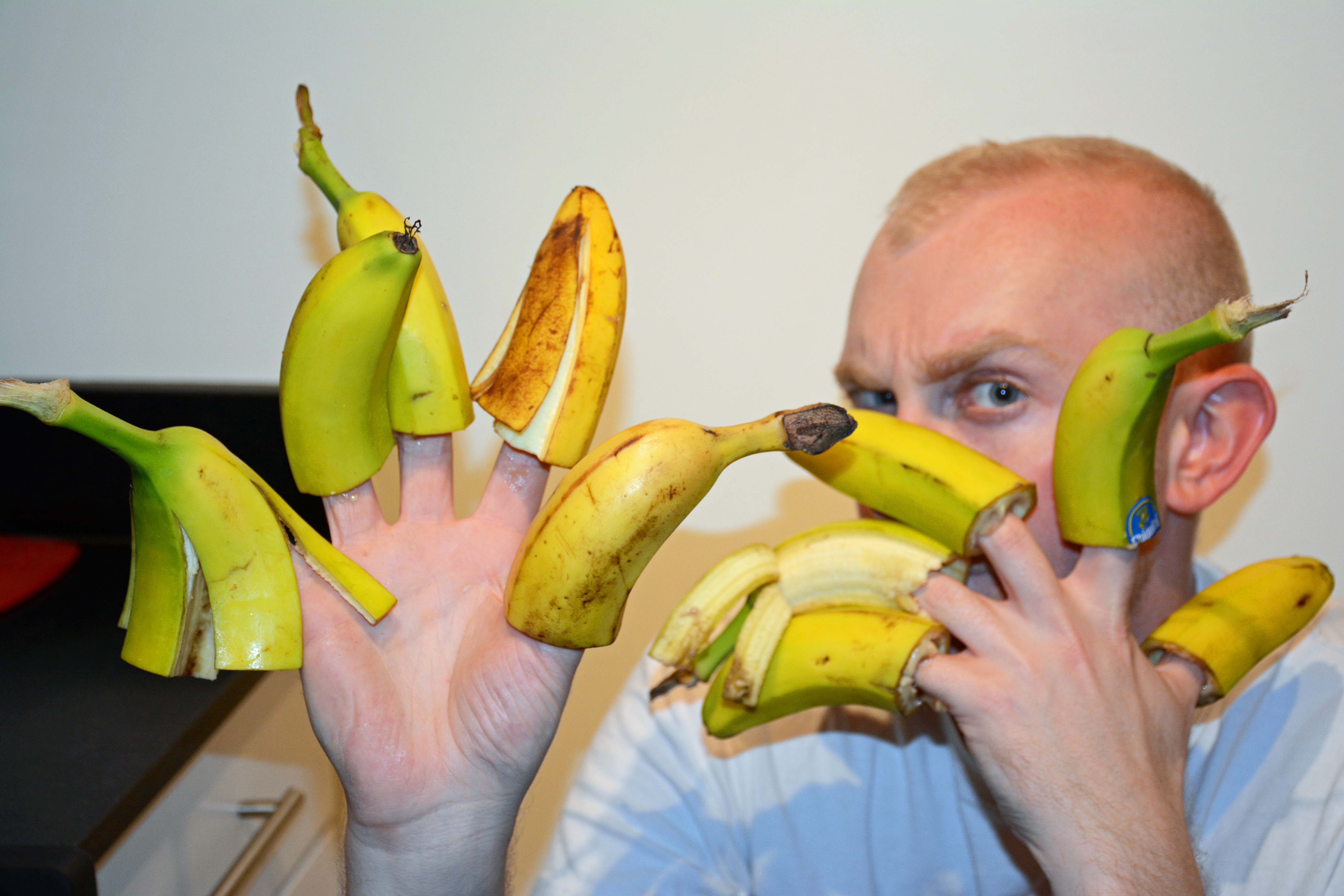 Banana hands.  At first I naturally pictured some sort of Edward-Scissorhands scenario with a chef whose fingers are fused into bananas at the tips, peels dangling down to his wrists, clumsily fumbling to torch a crème brulee with his fat banana fingers.  But now banana hands has taken on something of a personality of its own.  It lives and breathes…fire, of course, as a flambéed dessert would.  We have turned Banana Hands into some sort of an evil character from a comic book, or from some cheesy horror flick, who probably preys on bratty children who dare to want to eat dessert before finishing their Brussels sprouts first.

Last week I witnessed a coworker talking to the pastry chef in the kitchen, who had just given out the sounding cry for “banana hands”.  This server was saying in that creepy, movie trailer voice, “Just when you thought it was safe to walk down Royal Street…Banana Hands!”  That same guy also likes to sing any number of songs and jingles, changing the lyrics and filling in instead with “banana hands” where appropriate.  There are plenty of tunes that work.  Like, “He’s got the whole wide world, banana hands…”  Or, ZZ Top’s Sharp Dressed Man: “They come runnin’ just as fast as they can, cuz every girl’s crazy ‘bout banana hands…”  The possibilities are endless.

In any case, Banana Hands is very much alive.  His legacy lives on.  The other day when someone in the kitchen bellowed that he needed banana hands, I overheard another guy respond in a very thoughtful tone, “In one way or another, I think we all need banana hands.”

More From Wait For It...

The Best Bars to Discuss Business

Picture this-you're a young professional, a rise and grinder, and after much persistence, you finally have the opportunity to "meet and grab a drink" with an individual who may have the golden ticket to your career advancement. Then they ask where you suggest you meet, and you... 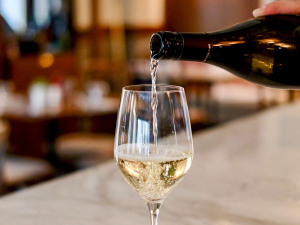 Copper Vine has deep roots in New Orleans. Its home at 1100 Poydras street is in the register of historic buildings. The owner of the restaurant, Kyle Brechtel, was looking, and not finding, his kind of bar, but couldn't. So to remedy his concern he made one, and with that Copper Vine was born. Once the home of Maylie's, a restaurant that was opened in 1876, the site is now home to Brechtel's restaurant. The new restaurant aims to honor... 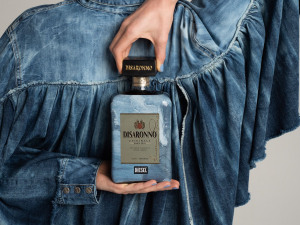 Disaronno Wears Diesel (and you should too!)

This September, the world's favorite Italian liqueur company, Disaronno, partnered with iconic streetwear-meets-denim company, Diesel to establish a limited edition bottle: "Disaronno Wears Diesel". This makeover comes as no surprise, as both Italian luxury brands live on the cutting edge of social initiatives, marketing, and progressive branding techniques. This collaboration is part of the Disaronno® Icon project, in which Disaronno...