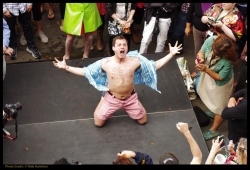 With spring weather in full effect, locals and visitors converged in the French Quarter for the 14th Annual Tennessee Williams Festival (TWF). Featuring panel discussions, master classes and a variety of plays, the four-day festival provided plenty of entertainment and education for novice writers, theater-goers and curious on-lookers.

Spread out over several venues throughout the French Quarter, the TWF started Thursday, March 20th with a master class featuring Marie Breaux called “Copyright for Writers” in the Historic New Orleans Collection. Set in the grand room of the architectural gem on Royal Street, Breaux espoused wisdom on the constantly changing laws and regulations protecting writers and photographers from intellectual theft.

Breaux was followed by talented author Zachary Lazar, who discussed the importance of dialogue in fiction writing. Lazar read excerpts from Ernest Hemingway’s “Hills Like White Elephants,” which he proclaimed to be “the perfect story.” At the end of his master class, Lazar read a passage from his forthcoming novel, “I Pity the Poor Immigrant,” due out in April.

Laura Lippman, winner of the first ever Pinckley Prize for Crime Fiction, followed Lazar on the New Orleans Collection stage. Author of the popular Tess Monaghan P.I. series, Lippman gave a very engaging talk called “Voice for Mysterious Purposes.” Her discussion transcended the mystery genre, giving insight into how she developed her own style which took her from a writer at the Baltimore Sun to a full-time novelist.

During these informative classes, local and national actors were on stages all over town performing some of Tennessee Williams’ most important works, and some of his more obscure. Thursdays shows—all staged at the Hermann Grima House on St. Louis Street—included “Gift of an Orange,” “Hotel Plays,” and “The Art Klub” on Elysian Fields.

The following day, the festival stretched out to other venues including the Queen Anne Ballroom at the Hotel Monteleone and the Williams Research Center on Chartres Street, where I caught the morning master class speaker, Justin Torres, who read an excerpt from his debut novel, “We the Animals.” His coming-of-age tale of a boy and his two brothers took six years to perfect a mere 144 pages, and according to Torres, couldn’t have been done any other way. In today’s sound-bite, short attention span world, Torres entertained the audience with a writing challenge to see who could write a paragraph using only one syllable words. The audience seemed excited about the challenge, and several eagerly read their chapter as Torres chuckled along.

While master classes and panel discussions were filling the day on Friday, Literary Walking Tours were available in the morning and early afternoon. At night, the theaters came alive, highlighted by the opening of NOLA Project’s “Cat on a Hot Tin Roof” at Le Petit Theatre. I caught the Saturday afternoon showing of this three-hour play set in one room over the course of an evening in the life of Big Daddy and Big Mama’s dysfunctional family. The flawless performance was highlighted by Randy Cheramie as Big Daddy and Cecile Monteyne as Margaret.

The weekend panel discussions grew to include venues at Muriel’s Jackson Square and the Palm Court Jazz Café, highlighted by “Sing Me a Story, Tell Me a Song” with David Simon (Treme), Tom Piazza (“City of Refuge”), Luke Winslow-King and Gwen Thompkins, and a conversation with actress Diane Ladd. I caught “Whose Life Is It Anyway?” featuring biographers Blake Bailey, Thomas Beller, Rich Cohen and Nigel Hamilton. Cohen spoke about his popular biography on Sam Zemurray, “The Fish that Ate the Whale: The Life and Times of America’s Banana King.”

The culmination of the festival on Sunday took place in Jackson Square as a huge crowd gathered to hear a diverse group of fans doing their best imitations of popular Williams’ characters Blanche Dubois and Stanley and Stella Kowalski. With so many talented actors and writers performing and speaking all over town, the Stanley and Stella shouting contest was the perfect way for novices to get in on the action.

Tennessee Williams lived much of his adult life in New Orleans and he used the city as his muse. It resulted in some of the author/playwright’s finest works. The Tennessee Williams Festival returned the love by naming the city’s only literary festival after him, and judging by the big crowds and wealth of talented presenters and performers, it will be around for a long time to come.