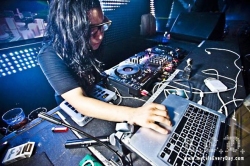 
Though less represented in New Orleans’ plethora of music festivals—save Voodoo’s Le Plur stage—electronic dance music (EDM) has seen meteoric success at clubs and festivals worldwide over the last few years. Even locally we are seeing more and more EDM shows booked, from weeklies and monthlies like Bass Church (Dragon’s Den), Kompression (1135 Decatur), and WCP’s Bassik (Republic) to an onslaught of DJ/producer performances packing larger audiences like Ampersand, House of Blues and the Sugar Mill.


“[EDM] is really accessible, really powerful, and doesn’t take much patience or attention,” says WCP founder and BUKU organizer Reeves Price. “I think that’s just the way our youth culture is, [they’re] so used to being stimulated these days. They don’t have the patience for a 20-minute Phish jam to wait for that 30 minutes of bliss. They want it now, and they want it loud and hard and fast, and I think that’s why dance music is just exploding in the last 18 months.”


If loud, hard, and fast is music to your ears, look no further than the BUKU lineup, which includes four 2011 Grammy nominees (Avicii, and Skrillex for dance music; Diplo and Wiz Kalifa for hip hop). Whether it’s the hard and heavy drops of Porter Robinson, the dynamic jamtronic-jazz fusion of Big Gigantic, or the inspired hooks and rhymes of artists like Yelawolf and Gramatik, this lineup has something to excite an array of music-lovers.


“The goal is to bring some [art] pieces into the mix that people can connect with that are also big and fun and not too overly intellectual,” says Price. “Some will be audio responsive, some may be more architecturally created on site—all very different and scattered around the grounds.”


Arguably one of the most alluring aspects of BUKU is the venue itself, the grand halls and courtyards of Blaine Kern’s Mardi Gras World. Situated on the banks of the Mississippi River in the heart of the Warehouse District, the site has exciting implications for the overall festival experience: a stunning, riverside, open-air venue (one stage outdoors, another indoors), with live music from daylight through sunset into late-night hours for a distinct and memorable dance party complete with both natural and LED lightscapes.


“We’ve definitely taken a cue from the venue and the area and vibe of the event,” says Price. “I see it as this oasis in the middle of an urban wasteland. We’re taking from the raw, rustic, weathered, industrial vibe of the Warehouse District and Riverfront area and fusing it with this very modern, advanced technological culture or society that will be BUKU.”


Localism and sustainability have been a primary focus top-down throughout the planning and production of this event. WCP’s partner, San Francisco-based InTicketing, for example, will plant a tree for every ticket sold. From efficient LED lighting to recycling and waste management to biodiesel and solar power sources, great care has been taken to ensure less impact on the local resource base and a positive impact on the local community, including job creation.


“Our whole staff is really coming from Orleans Parish, from security to box office director to stage managers to productions managers,” says Price. “We took a lot of effort to really hire as locally as possible.”
Single-day and weekend passes are available to audiophiles 16 and older in three tiers: General Admission, VIP (which includes a separate entrance, bar, viewing area, bathrooms, and access to the Grand Oaks Mansion Grotto) and Super VIP (which includes exclusive parking and Meet & Greets with BUKU performers). Doors open at 3 p.m., with music from 4 p.m. to 1 a.m. Saturday and Sunday, March 17-18. Find tickets and info at http://thebukuproject.com.

Music is coming back, but let's keep it socially distant. The New Orleans Suspects are preforming via livestream, for the first time since the outbreak of COVID-19, on Wednesday, June 3, from 7:00 to 9:00 p.m. The... 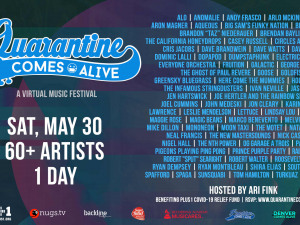 For the Love of Live Music: Quarantine Comes Alive

On Saturday, May 30th, New York music media and production company Live For Live Music, in partnership with Nugs.TV and PLUS1, will present Quarantine Comes Alive, a one-day virtual music festival. Featuring over 60 artists, the donation-based event will split proceeds between all the participating artists and the PLUS1 COVID-19 Relief Fund. Modeled after successful one-day music marathons Brooklyn Comes Alive and Denver Comes Alive,... 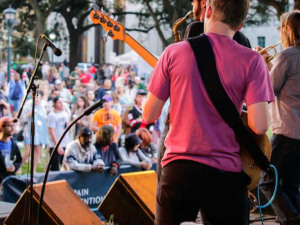 Virtual Fun With YLC and Wednesday at the Square

The Young Leadership Council (YLC) is continuing their 2020 benefit concert series by hosting a one-night virtual broadcast—YLC Wednesday at the Square: Get Down and GiveNOLA—on Wednesday, May 27, beginning at 5:00 p.m., live on Facebook and YouTube. "Last year we launched an exciting partnership with the Greater New Orleans Foundation to harness the power of music to unite our...