The Story Behind Frank Lloyd Wright and the Arizona Biltmore

If the Arizona Biltmore Hotel could talk, the old Grande Dame would probably sit you down in a cozy chair in front of one of her outdoor fire pits and tell you a story or two.  She would muse about the serendipitous timing of her gala grand opening just before the great stock market crash of 1929.  She would reminisce about the decades of stories involving Hollywood legends, famous musicians and other glitterati that have wined, dined and sunned there.  Like the time that Clark Gable lost his wedding ring out on the golf course (luckily an employee found it and returned it) or when Irving Berlin penned "White Christmas" under her palm trees or how Marilyn Monroe used to slosh around at her Catalina Pool.  She might even get around to casually mentioning that every president from Herbert Hoover to George W. Bush had made a point to stop by.

But if you were to ask her to reveal the truth of who was the real mastermind behind her magnificent design, she would likely give a sly smile and politely excuse itself from the rest of the conversation.

From the days since her first guests arrived, a swirl of mystery, rumor and debate about the creator of the cluster of iconic buildings have shadowed the Arizona Biltmore's lore.  In one corner:  Albert Chase McArthur, the brother of the initial owners and a former Frank Lloyd Wright apprentice.  In the other corner, none other than Frank Lloyd Wright himself, the incendiary and controversial genius; the man recognized by the American Institute of Architects as the Greatest American Architect of All Time. 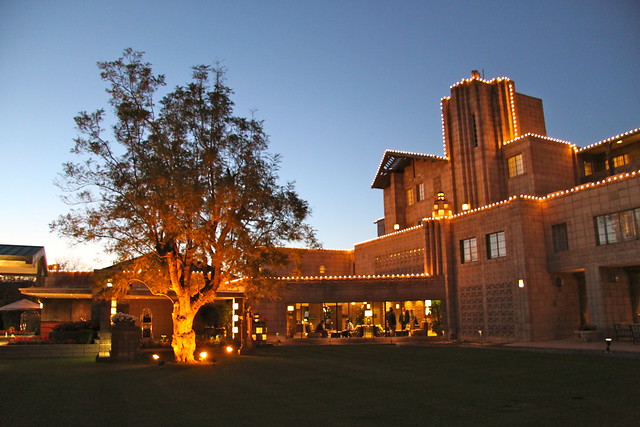 What is clear is that the two men initially agreed to work together on the ambitious project, McArthur as the chief architect, Wright as the consultant.   But after Wright's unceremonious dismissal from the project well before its completion, the true tale behind the masterpiece becomes murkier and murkier over time.  Did McArthur, in fact, minimize the Wright influence and truly deserve the credit for one of the all-time classic American designs?  Or was Wright the de facto ghost designer, manipulating the project from behind the scenes, bullying McArthur behind closed doors to execute his will?

Adding to the debate comes years of posthumous jockeying by each of the men's estates as well as hotel management's comfort in the promotion of the antique rivalry.  This drafting table whodunit just adds another layer of delight to the allure of one of the most unique luxury resorts on the planet.

I haven't taken more than twenty steps onto the property at the Arizona Biltmore Hotel before the name Frank Lloyd Wright reaches my ears.  Just outside the lobby a hotel guest is explaining to his wife that the hotel was in fact a product of Wright's and begins to catalog Wright's signatures on the property.

At face value he's dead on:  Wright's influence dominates the property.  The first clue are the hundreds of thousands of patterned building blocks from which the property is constructed.  These "Biltmore Blocks" actually opened the proverbial can of worms which brought Wright out to the desert.  McArthur admired his old master's use of them in a California project and offered Wright a $10,000 fee for using the patent.  Domineering at his best and down right deceitful at his worst, Wright accepted McArthur's offer and upped the ante to receive a $1000 a month consulting fee in addition to the $10,000 patent fee to help him start the work.  In truth, Wright not only did not have a patent (the Biltmore was actually later sued by the company who did own it), but the limitation of his experience with the blocks soon revealed itself and after just four months on the job, McArthur canned him in 1928. 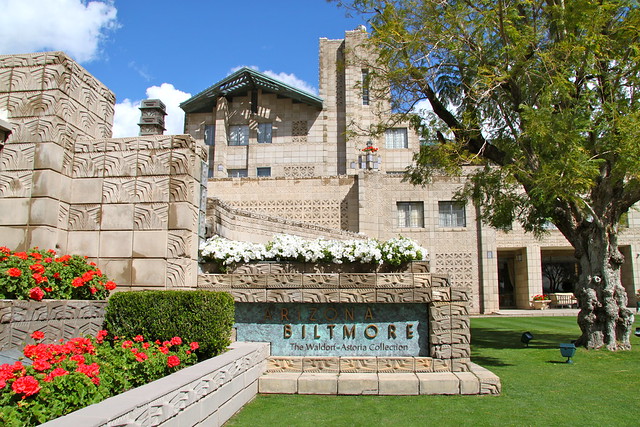 Then there are the eerie "Sprite" statues, reproductions of six-foot geometric, androgynous alien-like beings that inhabit the property.  These oddities belong to a long-lost Wright project in Chicago and ended up in the desert after a Wright devotee discovered them and created the reproductions.   Wright's third and final wife, Olgivanna, donated them to the hotel in 1985 just before her death.

The hotel itself heartily embraces Wright's connection:  The formal dining room is called "Wright's" and another casual dining room called "Frank and Alberts" were both anointed years after Wright's death.  An advertisement in the hotel elevator proclaims:  "Frank and Alberts--the name came, as both namesakes would agree, naturally."  Perhaps the two gentleman, who actually lived in acrimony, would argue otherwise if they were around today.

But perhaps most telling signature stands mere steps within the hotel entrance.  A massive stained glass display, a colorful angular design which bears Wright's unmistakeable design DNA arrests your senses before you even reach the front desk.  Like the Sprites and restaurant names, the stained glass was a posthumous gift, again from Olgivanna and some of Wright's disciples.

The only problem with all of this is that Wright himself famously scribed a letter that clearly validates that McArthur was the project's leader.  "Albert McArthur is the architect of that building--all attempts to take the credit for that performance from him are gratuitous and beside the mark."

He then later quipped that the project turned out "as badly as he expected" and then paradoxically campaigned for credit the rest of his life.  Allegedly he wrote a letter to McArthur's widow after his rival had died and declared "I have always given Albert's name as architect…and always will.  But I know better and so should you."

With both men gone by 1959, only the Blltmore herself knows the truth. 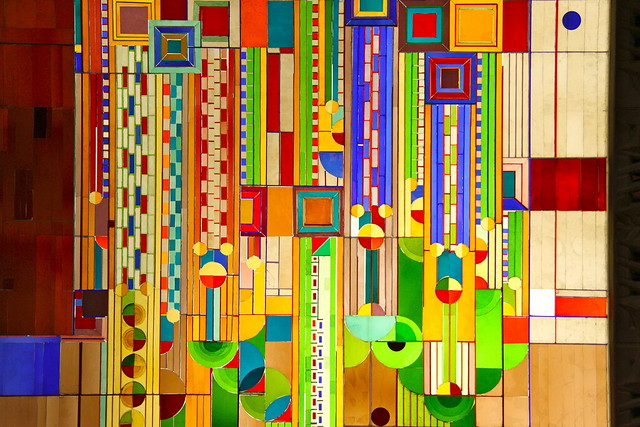 Passion for the Desert

If there was ever a city who needed a patron saint of architecture it's most certainly Phoenix.

Occupying an expansive area of 475 miles, The Valley of the Sun offers very little in the way of thought-provoking design.  The city's layout consists of a mostly flat, endless grid, marked by never-ending corridors of uninspired commercial developments and seemingly infinite clusters of low-slung, cookie cutter dwellings which stretch from one mountain range across the valley to another.

But perhaps that is understandable.  It is, after all, a city built smack dab in the desert.  The terrain isn't exactly hospitable to many building concepts and can be down right hostile to the human aesthetic.   Since it's initial settlement, architects knew their place:  servants to nature.

It is this exact challenge that made Arizona both the most maddening challenge as well as the most intoxicating muse for Wright.  Upon laying eyes on it for the first time Wright dubbed Arizona a "vast battleground" and commenced a late-life relationship with the canvas of the desert.

Several years after his departure from the Biltmore project, Wright commenced the construction of a winter retreat he called Taliesin West (Taliesin East lay across the country in Wisconsin) where he lived out his winters until the age of 91.  Today Taliesin West houses the Frank Lloyd Wright School of Architecture as well as his foundation.  Wright authored several other buildings and nine houses in Phoenix, none as celebrated as the Biltmore.  McArthur died in 1951 several years before Wright.  He never completed another building, only a few residences.

Today the Biltmore maintains its status in the upper stratosphere of luxury resorts.  The design still feels exceptionally relevant and the amenities are state-of-the-art.  But what separates the Biltmore from other 5-star resorts is an unmistakable old school, nostalgic feel.  You can almost imagine bumping into Dwight Eisenhower as he rushed to the golf course to make his tee time.  Or wandering into the piano bar and finding Sinatra, Sammy Davis Jr. and Liza Minelli holding court.  Or catching a glimpse of a young Ronald and Nancy Reagan on their honeymoon.  Not many places can evoke such a sense of history nor as a guest give you such a feeling of inclusion.

Whether or not Wright and McArthur have made peace in the afterlife, all we have to do is sit back and enjoy the "Jewel of the Desert" and let the mystery live on. 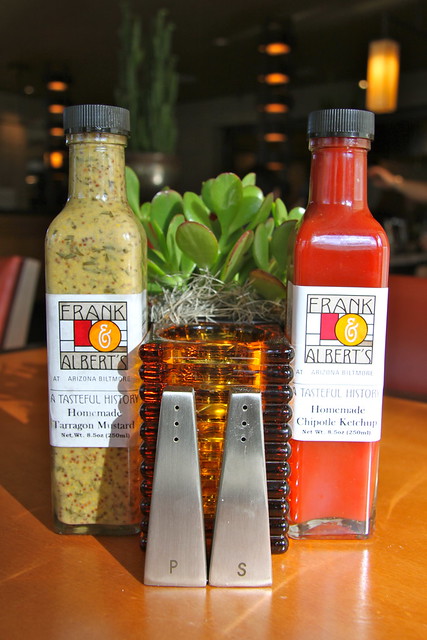 Most major airlines fly nonstop to Phoenix including Delta.  www.delta.com.

The Arizona Biltmore--A Waldorf-Astoria property has Wright's influence throughout and represents a piece of living history.  Rooms start at $299 during the winter season and $119 during the summer.  For a real treat, book a room in the new Ocatilla wing, offering club-level accommodations with a concierge-style experience, Wright inspired decor and complimentary executive level.  www.hilton.com

As Phoenix does not adhere to daylight savings the time difference varies from 2-3 hours depending on time of year.

Taliesin West, Wright's winter home and architecture school is open to the public and is 35 minutes from downtown.