Stopping by our table one morning, a young man earnestly inquires a moment of our time to ask a "quick question" for a project that he's doing-a study. We're handed business flyers as a means of validation; he introduces himself as David. The question is: Do you think that it's possible to live debt-free?

First of all, I'm thinking, never ask a couple of caffeine-jacked-up geezers for their opinion on anything. Don't you know that we were thinking existentially since before your parents were born? First of all, I think, let's break that question into three parts: Do I think? Yes. Is it possible to live? Sure. Debt-free? Define debt-free.

Is living debt-free the absence of the necessity of need or the ability to effortlessly pay for anything you require? Does it mean you needn't worry about money because you have so much or that you have none at all and don't need any?

There's a tramp with a sign in the intersection. He's breathing in exhaust fumes for the most part of the day, waiting for drivers to give him money. He probably doesn't pay rent. Sitting on his milk crate, "trying to waste his time, with his mentholated sandwich, he's a walking clothes line." Is he debt-free, or does he owe his body and spirit more? If he gets sick (and you know, eventually, he will), who will have the debt of taking care of him, or will he carry that future debt starting now? His sign says "God Bless, Anything Helps." Does he live by the kindness of strangers, and is that "debt-free"? After all, what does he owe anyone?

Are food, clothing, and shelter considered debts? Child care? Transportation? Taxes? Makeup, dry cleaning, toiletries, drinking water, rent? It's not debt if you have money coming in from somewhere-like employment. And to what do you owe your job? Is your performance for money a debt that you have to pay, so that you can pay the debt of your responsibilities to other things, like Entergy, Sewerage & Water, and flea medicine for Fido? It's a loaded freaking question.

Is debt-free a condition where there are more assets than liabilities, more income than outlay, more credits than debits? With more pluses than minuses, what do you have to pay to be on the positive side of that equation? Is it a case of "them that gots is them that gets"? If that's the case, asked Ray Charles, "How do you get it in the first place?" (A mystery.) How do you get the resources to become debt-free without going into debt-rob a bank?

If I have a business that allows my life to be debt-free, here's how it works: I can't get a lease until I have insurance. I can't get insurance until I have an alarm system and fire alerts. The state taxes my inventory every year, whether that inventory is new or left from last year. I need to replenish inventory as it sells. I might have to pay someone who works for me. I pay lights, cable, trash, supplies, repairs, and maintenance. I take the profits and suffer any losses. Somehow, at home, I'm not worried about the living expenses for me and my loved ones. Am I debt-free? What exactly is a debt?

Are living expenses considered debts? Is my growth and well-being (physical, mental, emotional, spiritual) a debt? Is the happiness of others who have come to be part of my life's function a debt that I have incurred? Do we not pay a debt to love every time we express and exercise that feeling? Is care in and of itself not a debt that we take on? Is responsibility a debt? Is loving something a responsibility, and therefore an expense-a debt?

So, what would you say to that sincere lad who approaches you with a seemingly innocuous question? "Sure, you dimwit squirrel, move to City Park, live in a tree, eat acorns!" Or, do you tell him, "Lad, you went into debt while you grew in your mother's uterus, and you'll be in debt until the moment they lay you in that pine box"? Not very reassuring, eh?

And when you get to heaven, will you still owe your soul to the Company Store? Are you gonna leave some debt behind for someone else to pick up? Did I inherit debt from my family? Do I have to repay kindnesses? Do I owe anyone an explanation? Have you ever considered "Can I live debt-free?" "NO!" says your bartender. Also, NO says the doctor, NO says the nurse, and NO says the lady with the alligator purse; we live in a debt society. Suck it up.

Well, what's the alternative? Join the counterculture who refuse to go into debt. Sounds easy, right? Don't become materialistic. Also, be willing to make sacrifices as to what you bring into your life-is this a debt you really want? Practice self-control, be goal-driven, and run away from anything that causes debt-in short, a lot of work for little reward.

True story: I once built a covered wagon and bought a mule, with the intent of traveling the country (with woman and child), being totally off-grid forever. A foray through white nationalist country resulted in the burning of the wagon and poisoning of the mule.

Can you live without being part of the debt system? No. Life, as we know it, will not
allow that.

Twenty-five years doesn't seem like a lot of time to a Bowhead whale or single malt Scotch, but, in your real life, a heck of a lot can change while many things can stay relatively parallel. In 1994, twenty-five years ago, Frank Sinatra, Ray Charles, Aretha Franklin, and Nina... 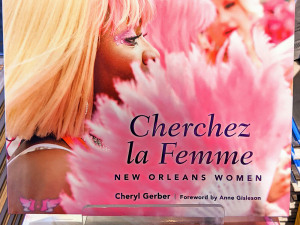 After hitting your fifth pot-hole, receiving a screwy S&W bill, spending six hours at the DMV, or watching our national news report upon one more in the seemingly endless assaults by Trump to undermine women, social justice, and our environment, you need something other than (or in addition to) a stiff drink to restore something resembling a positive outlook. I just received a happy pill in the form of a book, Cherchez La Femme: New Orleans... 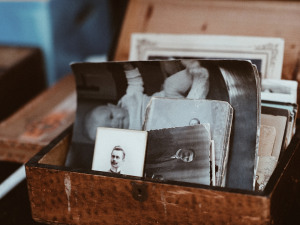 Pho-to-graph (noun)
A picture made using a camera, in which an image is focused onto film or other light sensitive material and then made visible and permanent by chemical treatment or stored digitally. My definition: A person or a moment in a life that should be honored and remembered.
In our home, just as in the shop we once had, photographs are honored. I credit my husband with much of this, as he is very sensitive...