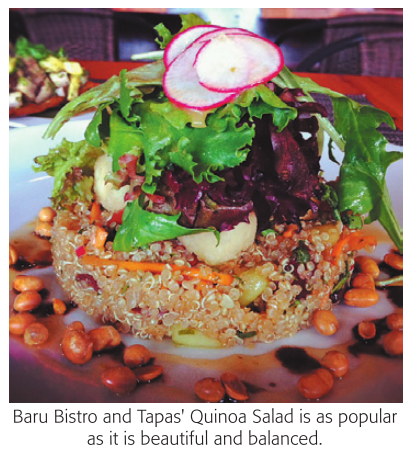 In a country where people discuss the preparation of burgers and barbecue with the same vim and vigor also used to discuss the presidential election, it's safe to say that Americans don't always vote "yes" for vegetables. Other countries, however, rely heavily on things like legumes, root vegetables and grains to act as the bulk of most meals. Whether meat is diffi cult to come by or reserved for special occasions, many dishes from ethnic cuisines - namely Indian, African, and Mediterranean --are oftentimes vegetarian by nature.

Here in New Orleans we have an ethnic cuisine all of our own, so it's especially inspiring to see many old and emerging restaurants serving cuisines from around the world -- particularly for vegetarians. Since most menus at ethnic restaurants feature separate sections dedicated wholly to meat-free options, ordering meatless becomes decidedly simple.

Nirvana on Magazine Street showcases an entire page of vegetarian dishes on their menu and the Dal Makhani -- a blend of several different kinds of lentils cooked with fresh tomatoes, onions, spices, and a touch of cream -- is one of the most popular. The dal's stew-like consistency is best enjoyed over long-grain basmati rice or smeared onto buttered naan bread. For some bite, try the Bhindi, an okra and tomato dish that's livened with the flavors of garam masala (a mixture of cumin, cardamom, black pepper, cinnamon, coriander, etc.) and pays homage to familiar Creole variations.

Ethiopian cuisine becomes less intimidating at Cafe Abyssinia, where spicy lentil sambusas (similar to a Greek spanakopita, or spinach filo) are served piping hot in flaky pastry and bursting with soft lentils and onions. Use the porous, tangy-tasting Injera bread to scoop up mouthfuls of Kik Alicha, a mild blend of split peas cooked in a sauce of onion, garlic and ginger. Then wonder how you ever lived without it. 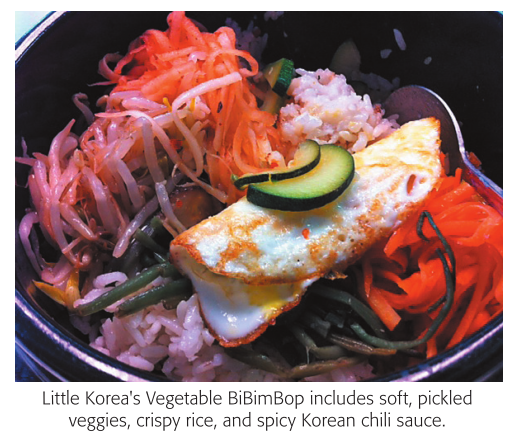 Vietnamese food, known for being extremely healthy and fast, is also becoming quite trendy. Add your name to the wait list for dinner at Magasin Cafe on Magazine to enjoy a steaming hot bowl of vegan pho. Magasin's pho (pronounced "fuh") combines a lush broth of ginger, onion, leek, star anise, daikon, bok choy and carrots with vegetables like cauliflower, broccoli, and zucchini and is served over rice vermicelli with slices of tofu. Traditional fl avor-boosting accouterments - prouts, fresh-sliced jalapeno, lime wedges, basil, and cilantro - are served alongside to add at your discretion.

Chefs who are inspired by different ethnic cuisines and get creative with vegetables remain to see an increased interest in their dishes of less meaty proportions. Colombian native Edgar Caro, owner and chef of Baru Bistro and Tapas, has a quinoa salad that's as popular as it is beautiful and balanced. First, quinoa is boiled in salted water, flavored with a bit of red wine vinegar and then cooled - here Caro sees the ancient grain as a "white canvas" for him to add whatever delicious, seasonal vegetables he can get his hands on. Usual suspects include purple Peruvian olives, cucumbers, tomatoes and squash (all raw) and some fried Salao cheese, which possesses a strong saltiness similar to feta. Peppery arugula is tossed in a chimichurristyle arugula vinaigrette and placed delicately on top of the quinoa. A finishing touch of crunchy soy nuts adds textural complexity. Another vegetarian crowd-pleaser is Caro's Guacabello -- a simple, yet scrumptious medley of diced grilled Portobello mushrooms and ripe avocados seasoned with good olive oil, salt and pepper, and then spooned on top of fried house-made spinach tortillas. Four ingredients never tasted so good. 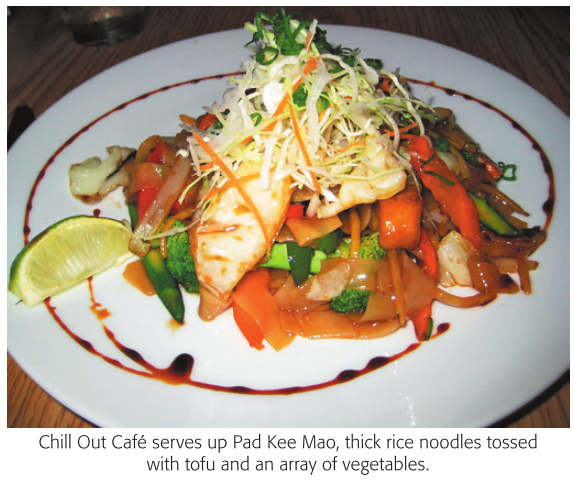 Over at Carmo on Julia Street, owners Dana Honn and his wife Christina are gaining a lot of attention for their vegan, vegetarian, and gluten-free friendly menu of traditionally inspired tropical cuisine. Try their Brazilian Acaraje, a fresh black-eyed pea fritter fried in nutritious red palm oil, then split open and stuffed with a paste of chilies, onions, tomatoes, cashews, peanuts, and coconut milk. Or explore Mexican flavors with the Esmeralda Salad, a fall-friendly combination of quinoa, black beans, corn, and Poblano peppers tossed with a sweet and spicy green chili coconut vinaigrette, then topped with toasted pumpkin seeds and crumbled cotija cheese. End the meal on a sweet note with their Vegan Caribbean Banana cake; a moist and delicious blend of coconut oil, raw sugar, lots of matured bananas and walnuts.

For quick and easy Thai food, the unassuming Chill Out Cafe on Burdette Street serves up vegetarian favorites like Pad Kee Mao, thick rice noodles tossed with tofu and an array of vegetables including broccoli, shaved asparagus, bamboo shoots, and snap peas. And taking over a former fast-food building on South Claiborne, Little Korea also makes a name for itself in a very modest setting. Though a considerable amount of menu items contain beef, pork, or seafood, the Vegetable BiBimBop makes up for what it lacks in meat with soft, pickled veggies (including seasoned radishes and bracken root), crispy rice, and spicy Korean chili sauce.

Finally, Lebanon's Cafe on Carrollton has plenty of protein-packed vegetarian appetizers and mains, including the Musaha, a sauteed eggplant dip with roasted garlic, jalapeno peppers, sun-dried tomatoes, onions, and celery marinated in olive oil and white vinegar. Pair the spicy dip with Labna, a cooling blend of yogurt, olive oil, and mint to round out flavors. For a taste of the Middle East at home, stock up on vegetarian-friendly hummus, stuffed grape leaves, and tabuli from Covington-born Nur's Kitchen. These dishes and more are available at local grocery stores and the Crescent City Farmer's Market.

So, if "more meat" isn't your motto, cast your attention to cuisines of Eastern infl uence and prepare to be amazed at how popular (and delicious) vegetables can be.