The caffeine headache—we've all had one. Whether it’s a reminder that you've not had your morning dose or, on the contrary, a painful warning paired with the jitters from overindulgence, the most common misconception is that all caffeine and its effects are the same. This isn't going to be a coffee-or tea-bashing article; rather, an education on which varieties are best for the effect you desire.

I had the opportunity to spend the day with PJ's Coffee Roastmaster Felton Jones at the North Peters Street roasting facility and was blown away by the amount of information I received on their products and coffee in general. Phyllis Jordan founded the retail coffeehouse chain back in 1978. Felton credits her as a mentor, admitting, “Having been with the company for the better part of 18 years, she's been a motherly figure in my life. She instilled in me the heritage and traditions of the brand while familiarizing me with the products.” These are the products that have had the hearts of New Orleanians for over 30 years. Medium and dark roasts, seasonal flavors, and decaf coffees are made available to customers at all coffeehouse locations, and on May 1 st , the company broke ground in the New Orleans area by offering their products in single-serve “K Cups”. When I asked Felton about packing all that flavor into one tiny cup, he explained, “Today people are attracted to the convenience and less waste that comes with the single-serve coffees. Single-serve brew yields a different taste due to the temperature being different than that of a standard hot drip—therefore we work strategically with the packager to make sure the approved single servings match a profile that mimics what the customer is accustomed to.”

In speaking with him about the selection of beans, roasting techniques, and taste profiles, I realize that Mr. Jones is more of a scientist—an engineer of coffee, if you will. Throughout the course of my tour, he schooled me on the roasting process and how this affects taste as well as caffeine content. Pointing out that the region from which the coffee beans are harvested imparts the most impact on flavor profile, he allowed me to sample the various roasts to solidify his teachings. I learned that higher altitudes yield a bean denser than most, resulting in a crop best suited for darker roast. “When roasting, you are essentially cooking moisture out. The denser the bean, the longer it can expand, meaning the longer it can roast.”

Caffeine levels are affected in the roasting process as well. I was shocked as I realized the light roasted coffee I had preferred all these years had more caffeine in it than a shot of espresso. The longer the bean roasts = the darker the roast = the less the caffeine. Espresso has less caffeine than a cup of light roasted coffee; however, the misconception that the espresso is stronger lies purely in its taste. A bolder, stronger-tasting brew does not mean the caffeine content is any higher than in a smoother, milder blend. Shockingly, it is actually the opposite. Acidity can also be abbreviated in a variety of ways: mainly the cold brew process. At PJ's, coffee grounds are cold-drip brewed with room temperature water for 18 to 24 hours, then refrigerated as a coffee concentrate. Felton suggests that this technique plays a major role in lowering acidity, upping coffee’s health benefits by reducing the risk of acid reflux and headaches.

New Orleans Roast shares the same address as PJ's roasting facility, and magical things happen in the roasting department. The processing machine on site produces 800 to 1000 cases of coffee per day. 100% Arabica coffee is roasted, cooled, then processed, as 90% of the brand's coffee is ground nad packaged for sale. Restaurants and hotels citywide take pride in utilizing the local convenience of New Orleans Roast, while retail territories at this time include Louisiana, Mississippi, and Texas. Felton Jones remains roastmaster for this partnered brand, and informed me that they are currently working with the Wal-Mart corporation to get New Orleans Roast on shelves in other markets. The tea selections that are housed and sold out of the same facility come via Mighty Leaf and Harney and Sons, which range from full-bodied black teas to herbal, decaffeinated varieties. 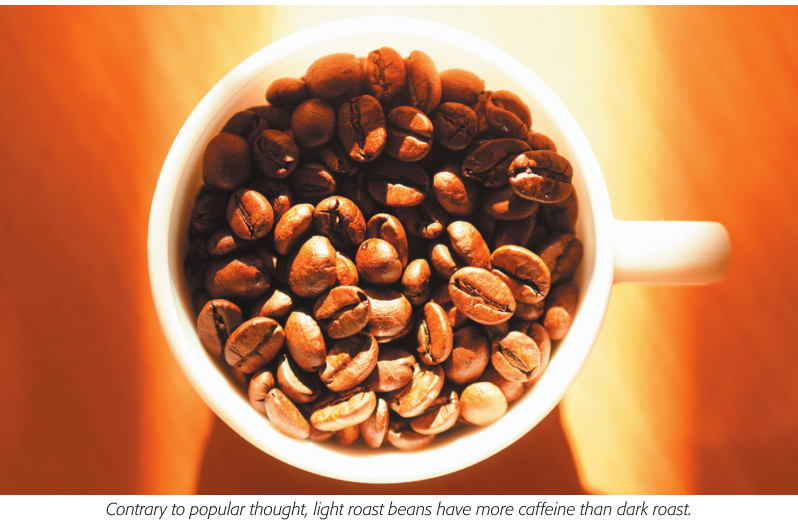 In understanding that the tea bag has evolved over the years from paper filters to nylon mesh, the drinkable product itself has remained unaltered for the most part. Processes have been established to decaffeinate those varieties with a natural caffeine content, but in most cases, tea has much less caffeine than coffee. A typical cup yields 80 -135 mg of caffeine. In relation to what is considered safe to consume, the Mayo Clinic released a statement recommending that 200-300 mg of caffeine was generally considered safe, but that 500-600 mg daily can lead to a number of health problems. As with the misleading generalizations of coffee roasts and their caffeine contents, tea has its myths as well. The caffeine levels vary more over the individual teas, rather than their broad categories. In a study on black, green, and white tea leaves, the most caffeinated of the three was the white tea, dispelling the myth, once again, that lighter means less caffeine. The most recognized benefit of tea is its acclaimed antioxidants. The flavonoids inside the black and green tea families help retard the oxidation of low density lipoprotein, a very detrimental reaction due to exposure of free radicals. A study performed by the Office of Minority Health has attributed the higher amounts of antioxidant teas consumed in the Asian diet as a reason for the population's lower cancer rates. However, in comparison to the American population, disparities do exist in regards to certain types of cancer and the regional environmental factors.

Bottom of the Cup celebrates over 80 years as the spot for sipping and psychic services. Tea selections from all over the globe—herbal decafs, rooibos, Darjeeling, as well as flavored full-bodied black teas—can be found in their shop. With an online market to boot, there's no wonder why this tea room is world-famous. Most locals recall the news segment in which one of the staff psychics, Otis, predicted in a tarot session with WGNO reporter Chriss Knight that our beloved Saints would win the 2010 Super Bowl.

New Orleans is a place where folkloric practices like pairing mysticism and a savored pastime together are nurtured and appreciated. One particular NOLA tradition is the use of chicory, the root of the endive plant, in coffee. The ground root flavor is strong and distinct. Most people love it or hate it. The use originated during the coffee shortages of the 18 th century, when it was employed as a filler to stretch the shrinking coffee supplies. A fable associated with this root is that it somehow increases the amount of caffeine content in the coffee; however, this is another falsehood based solely on the bitter, bold characteristics in which it lends. CDM, Cafe du Monde, French Market, and Community Coffee all use the chicory root as a flavoring agent in certain varieties of their coffee, celebrating the essence of New Orleans in every cup.

Decaf coffees and teas can assume a very caffeinated appeal when peppered with bold flavors and spice, making them perfect for weaning off the strong stuff. A lot can be said about the power of the mind—if a bold veil on a dim drink will get you over your midday slump, so be it. If you dislike the taste of coffee or tea and seek your caffeine in other forms, say sodas, understand that the caffeine you ingest in that beverage does in fact comes from coffee. One of the safer practices by which caffeine is removed involves soaking the beans in water. The water is then treated with a chemical mixture that burns off in the curing process. The extracted caffeine, being a profitable byproduct, is then sold to companies that use caffeine in their merchandise, from sodas to beauty creams and even chewing gums.

Large doses of caffeine, no matter the transport capacity, can cause a plethora of side effects, heart palpitations, jittery sensations, sweating, and headache being the most common. It is important to know what it is you are putting in your body, particularly if it appears to have become a habit. Whether it’s a habit of necessity or of aromatic craving, being conscious of the impact can result in a more sensible intake. Seeking the opinion of someone as well-versed in the industry as Felton Jones, I asked him to describe tea and coffee in one word each. His response: “Tea, to me, means Zen, and coffee means social.” While I wholeheartedly agree with Mr. Jones, no matter your take on the liquid refreshments, the most important way to enjoy is in moderation.