A Tribute To Allen Toussaint 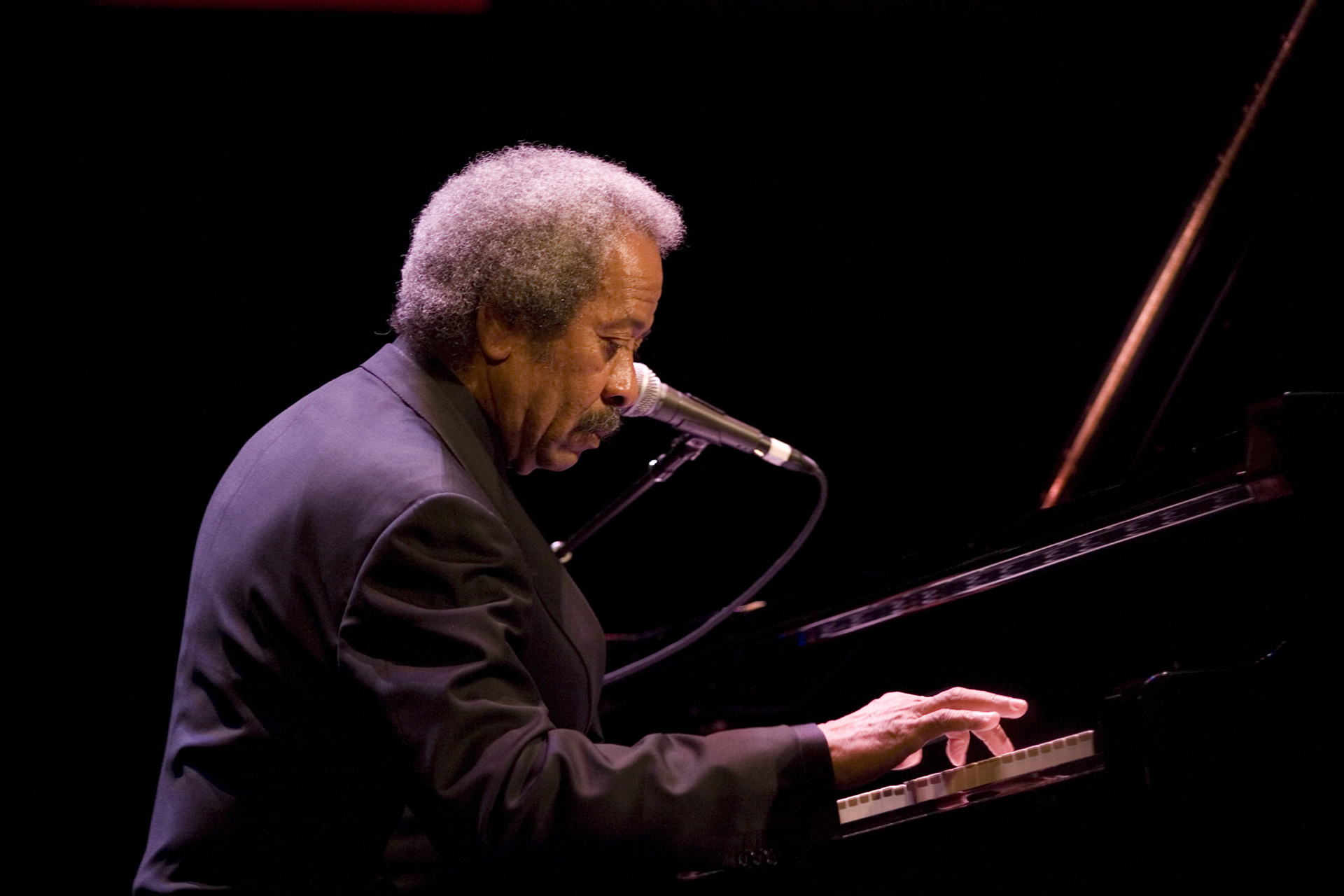 If it's true what they say about a person's life being measured by the volume of their body of work, then Allen Toussaint's place in that pantheon is assured.

Most songwriters measure the length of their compositions in minutes and seconds. Toussaint's works can be measured in hours, days and weeks. Possibly even months and years. That's how long it might take to play everything he wrote, composed or produced if you played them all, one after another.

Toussaint, a world-renowned pianist, lyricist and composer who passed away at the age of 77 on November 10, 2015, left behind a legacy of songs that are known to millions of people worldwide spanning at least three generations. Many of his songs were covered by some of the biggest names in the popular music industry. His canon of original work is estimated to be in the upper hundreds. From the mid to late 1950s right up to the night of his passing he was either writing songs, performing them, producing them, arranging them or singing them. Very often it would be all or any combination of the above.

On the short list of familiar hit songs he wrote and/or performed in the early 1960s when he led the house band for Joe Banashak’s New Orleans-based Minit and Instant record labels are “Mother-in-Law” (Ernie K-Doe), “I Like It Like That” (Chris Kenner), “Fortune Teller” (Benny Spellman) and “Ooh Poo Pah Doo” (Jessie Hill), plus some of the first records of Irma Thomas and Aaron Neville. Between 1961 and 1970 he wrote and produced a string of hits for Lee Dorsey, including “Ya-Ya”, “Ride Your Pony”, “Get Out of My Life Woman”, “Working in the Coal Mine” and “Yes We Can” which was later covered by The Pointer Sisters and turned into their biggest hit.

Toussaint’s success continued to resonate throughout the music industry even after his residency with the Minit/Instant labels ended. His 1965 instrumental composition “Whipped Cream,” was a hit for Herb Alpert and The Tijuana Brass and it became the theme song for the TV show, The Dating Game. And even though some of his compositions failed to chart when they were first produced, amazingly, they found a better life decades later. “Here Come the Girls”, a song he wrote for Ernie K-Doe’s unsuccessful comeback attempt in 1970, was resurrected in 2007 for a commercial by the Boots Pharmacy chain in England and it became a Top 40 record in the British Isles.

Other musical icons Toussaint worked with over his long career include Paul Simon, Paul McCartney, John Mayall, B.J. Thomas, Etta James, Elvis Costello, Leo Nocentelli, Dave Bartholomew, Solomon Burke and groups like The Meters, The Neville Brothers, Three Dog Night, The Band, and many more. His credits even extended to the Big Apple where his musical production, Stagger Lee, ran for 150 performances in an off-Broadway theatre.

For his accomplishments, Toussaint was inducted into the Rock and Roll Hall of Fame in 1998 and the Louisiana Music Hall of Fame 11 years later. In 2013, he was awarded the National Medal of Arts by President Barack Obama.

A low-key, modest, easygoing personality, Toussaint has been described as a “humble and gracious gentleman” by nearly all who knew him.

“There’s not going to be a replacement for him. They just don’t make them that way anymore.”

This spring, there will be two major shows paying tribute to Toussaint and his extensive and varied repertoire. The man that New Orleans Jazz & Heritage Festival Producer Quint Davis called “a one-man Motown” will be feted at this year’s JazzFest with a lineup of stellar performers yet to be announced. In recent years, Toussaint had become a Jazz Fest fixture once he began performing and singing his own original compositions.

Not far from the Jazz Fest site, also in the Gentilly neighborhood, the Anthony Bean Community Theater will also host a Toussaint tribute with a lineup that will be announced as the May 20 opening date gets closer. Toussaint was originally scheduled to perform his songs in person when the show was announced at the beginning of the season, but, since his passing, Bean has confirmed that the show will go on with other performers showcasing Toussaint’s works.

Bean, who worked with Toussaint on several original productions in the 1980s and 90s, including an Irma Thomas tribute show that reprised last fall, called Toussaint “New Orleans’ Berry Gordy,” drawing a parallel between him and the legendary Motown Records producer from Detroit.

The show, Bean said, will include about 20 of Toussaint’s most familiar songs. He also noted, “It’s going to be filled with singing and dancing, and in between there’ll be tidbits about how the song was created. It’s going to be a fun evening. We’ve got dancers and actors in it. It’s a musical revue and it’s called ‘Southern Knight,’ which is a tune you’ll hear throughout the play.”

Describing his experiences working with Toussaint, Bean said, “Allen was a very quiet man. Very pleasant to work with. Everybody knows he was smooth and cool. I’d never seen him get excited. I would tell him, ‘Allen, I think we should move in this direction with this. I think the songs should be bigger than life.’ And he’d say, ‘Oh, yeah, that will work’ and that was the most excited I’d ever seen him.”

Continuing, Bean said, “The way he would work, particularly at the piano, was that we would read the scene over together and I would have to feed him the emotions. And he’s playing the piano as I’m talking. And then it would come to him. He wrote a piece titled ‘I Know Why the Caged Bird Sings’ for the play we were working on together. Even now it has to be the most beautiful song I’ve ever heard. Allen was very different. He was so contained, yet exactly what he wanted and what you wanted came out in his writing."

“He was so gifted,” Bean continued. “Like the Cher song says, ‘He was a complicated man.’ Allen was very complicated, but his music speaks for itself.”

Mike Shepherd, Executive Director of the Louisiana Music Hall of Fame, had his own memorable observations of Toussaint to share. One of the most memorable of those experiences was the night of Toussaint’s induction into the LMHOF in 2009. It was at the Mother in Law Lounge which was being managed at the time by Betty Fox, the daughter of Ernie K-Doe’s deceased wife, Antoinette. Toussaint was inducted on the same night as K-Doe (posthumously), along with Benny Spellman who sang bass on “Mother in Law” and was still living in a Pensacola, Florida, nursing home at the time.

“The lounge wasn’t doing well after Miss Antoinette’s death and Betty asked for my help to keep it open,” Shepherd explained. “She needed a special event to draw people in.

“I needed to put Ernie in the Hall of Fame and he, Allen, and Benny were joined at the hip with their songs. So I reached out to Allen and told him, ‘You are the factor that glued them together. Could I talk you into being there and allow me to induct you into the Hall of Fame also?’ And Allen, as per his normal, gracious self, said, ‘It would be my honor, not only to be there for those two great singers, but also to become a part of something from my home.’”

As he was being inducted, Toussaint told the large crowd, “This means more to me than all my other awards because it’s from home.” After receiving his induction plaque, Toussaint performed some of his biggest hits, which were greeted by enthusiastic applause and media coverage from all of New Orleans’ network-affiliated TV stations.

“Allen taught me something that night- how well-loved he was and how far his influence stretched,” Shepherd said. After the Associated Press reported on the induction, which went into hundreds of publications worldwide, Shepherd said he received between 4,000 and 5,000 hits on the LMHOF website over the next three or four days. “They came from nearly every state and Canadian province, plus from the U.K., Spain, Ireland, and France. We’ve never had that much of a response to the induction of an artist before or since."

“Allen was a virtuoso who could play damn near anything he attempted and do it great,” Shepherd continued. “He could play good guitar. He had a career that many people don’t have a clue about,” noting that Toussaint played piano incognito on many of Fats Domino’s records when Domino couldn’t be in the studio himself for those recording sessions.

“There’s not going to be a replacement for him,” Shepherd concluded. “They just don’t make them that way anymore.”

In 2007, Italian rock band Giuda emerged in the music scene with the charisma of their early punk predecessors and the stomping energy of 1970's glam rock 'n rollers. With a retro sound that can be likened to 70's brit-rock bands Mud and Slade, Giuda puts their own contemporary...

Bourbon Street is named after a royal family of France, but these days, it's not a place associated with regality. The notorious 13-block street was a residential area for the upper crust, with fabulous restaurants, in the 1800s. After the nearby legal red-light district Storyville officially shut down in 1917, Bourbon Street became the hotspot for debauchery, with a handful of high-end restaurants and lounges nestled within. By the 1950s,...

In late 1966, when a song titled "Tell It Like It Is" exploded onto the pop music scene and quickly shot up to #2 on Billboard's Hot 100 and #1 on Billboard's Hot R&B surveys, no one could have been more surprised than its singer, a then-25-year-old New Orleanian named Aaron Neville. The voice behind the song was unlike any ever heard in the American popular music canon up to that point. The smooth, heartfelt crooning of the...